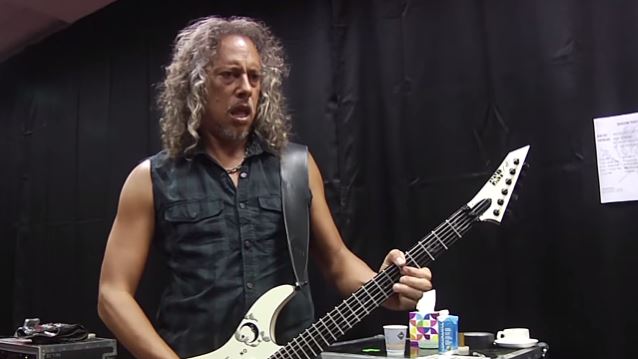 METALLICA guitarist Kirk Hammett has confirmed to HeavyMetalAbout.com that the band is in the process of recording some of its new material for the long-awaited follow-up to 2008's "Death Magnetic" album.

Aside from touring, METALLICA has spent much of the seven years since the release of "Death Magnetic" on several other projects, including launching a music festival, collaborating on an album with the late Lou Reed and making a feature film.

Asked if it's "freeing" for METALLICA to be at the point in its career where the band doesn't have to record new albums and is able to do it when they want and how they want, Hammett responded: "Absolutely. One always wants to work at the pace that they're most comfortable at. It's been about, what, seven or eight years since our last album? It doesn't feel like that to me, but I know it is."

He continued: "Our first three albums came out our first three years, and for some reason that boggles my mind nowadays. Back then, it was just what everyone did. New year, new album and tour. Even a generation before that it was every six months a new album and tour. So, having said all that, taking seven or eight years between albums is a lot of time, but we've filled it up with other things, like making a movie, making an album with Lou Reed, going on tour pretty regularly."

Hammett added: "Let me just say that I'm grateful that we're at a point where we can put out an album at our own pace, because there's just so much other stuff that takes up METALLICA time that's maybe not as equally as important, but just as relevant.

"So, the answer to your question is yeah, it's great being able to work at your own pace, and still be able to be a father and be a husband, and everything else that comes in the wake of that. We have songs, and we are recording them, so that's a good sign."

Hammett told Ultimate Classic Rock about the direction of the new METALLICA material: "It's heavy. We've got some heavy stuff going. It delivers on that front, for sure. You know, I would say a lot of it is along the lines of 'Death Magnetic'. A lot of it seems to be going along those lines. But, you know, with social media now and everything else, I'm a little bit wary to comment too much on the album, because then people pick up on it. Then people think that that's the final definitive statement on what this album is, or how much of it is done, or what it sounds like or whatever — and that's not really the case. It's not accurate. [Laughs] We’re still working on it."

Frontman James Hetfield was the first member of METALLICA to apparently confirm that the band is in the studio recording the follow-up to "Death Magnetic". Hetfield did not clarify whether the group was actually laying down tracks for its tenth studio album, although the band members have said in various interviews that they've been writing for much of the past year. Bassist Robert Trujillo told The Pulse Of Radio not long ago that the band was enjoying the writing process. "We're having a really amazing time," he said. "It's fun, it's a lot of hard work, it's like you're looking at that mountain of ideas and you're like, 'Okay, it's time to climb this beast and do what we've got to do.' I'd say we've pretty much exhausted our touring cycles, so we're really, really excited about nurturing the songs and bringing them to life and that's where we're at right now."

Drummer Lars Ulrich recently told RollingStone.com that METALLICA had written close to 20 new songs for its new album, although he declined to offer a possible release date for the new CD.

He added that the band doesn't want to record in a way that feels "labored over and overthought."