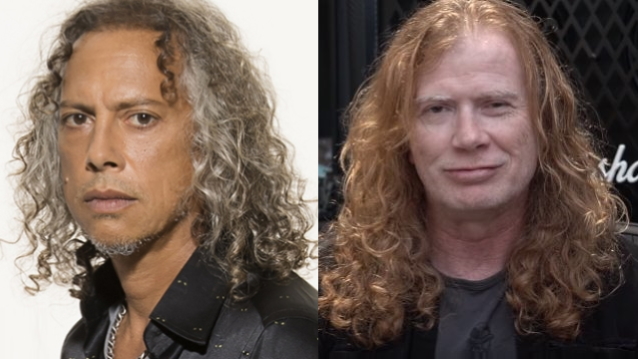 Kirk Hammett says that METALLICA's relationship with Dave Mustaine "totally changed" after they performed together on several occasions during "Big Four" shows and at METALLICA's 30th-anniversary concerts in 2011.

Mustaine was a member of METALLICA for less than two years, from 1981 to 1983, before being dismissed and replaced by Hammett. Mustaine went on to form MEGADETH and achieve worldwide success on his own.

Mustaine feuded with the members of METALLICA for more than two decades before finally patching things up over the last few years.

Hammett reflected on the 30th-anniversary shows during a recent appearance on Dean Delray's "Let There Be Talk" podcast. He said (hear audio below): "It was a very, very, very cool thing. It's probably one of our best experiences as far as celebrating time that has passed, for sure.

"It's weird. When we brought [original METALLICA bassist] Ron McGovney and Dave Mustaine on to play those shows, something happened and it really just improved our relationship with those guys tremendously — especially with Dave. After those shows, Dave's whole attitude toward us just fucking turned around. … Something happened and our relationship with him just completely totally changed and got much, much better.

"I think what had happened was he actually found some closure by coming up on stage and playing with us," Kirk continued. "And I remember, my attitude was, 'Dave, play whatever you want, man. If you wanna take all the fucking solos, I'll play rhythm guitar. It's no big deal to me.' And I remember him looking at me, going… He was just, like, looking at me, going, 'Okay.' But I can tell that was not what he was expecting to hear from me.

"When we actually played, I remember standing next to him, going up to him, he's ripping a solo while I'm playing, it was a moment for the both of us," he added. "And all of a sudden, all that shit, all that fucking bad vibes, all that schism, all that shit talking didn't even fucking matter anymore — it didn't fucking matter anymore. And as a result of it, we're all friends still. From that point on, we went on to do the 'Big Four' [shows featuring METALLICA, MEGADETH, SLAYER and ANTHRAX], and that was a great thing as far as all of us just kind of bonding. And it really fucking established and really vindicated all of us as just people who just love this fucking music and had a passion for playing it and took that passion everywhere we went."

Back in 2016, Hammett told the "Word Of Wheeler" podcast that he understood Mustaine's continued resentment toward his former bandmates over the way he was dismissed from the group. "I've always seen Dave as someone who was just really, really sad, really angry, really frustrated about his situation with METALLICA, and he never could let that go," he said. "And, you know, I've always shown a lot of empathy for him, understanding that he was just pissed off. It's the equivalent of the woman of your life leaving you. I mean, really. When your band kicks you out… I've never been kicked out, but I can imagine it's a horrible experience, especially if it's a band that you feel really passionately about. So I can understand Dave's plight over all these years. But I will also say that when we did these 30th-anniversary shows at the Fillmore [in San Francisco], and we invited Dave to play on all those 'Kill 'Em All' songs, man, it felt so good to have him playing on stage. It felt perfectly fine for me to, while Dave was playing the guitar solos, for me to go over to James [Hetfield, METALLICA frontman] and play the rhythm parts with James, and it wasn't a big deal at all. And I could see from the look on Dave's face and just from his whole attitude that it was super-cathartic for him. And I could see how it was helping him. And so I just took it all in stride. And it's interesting, because since then, I think, Dave's relationship with us is a little bit better now. I'd like to think that that whole thing just kind of healed some scars that needed to be healed."

Drummer Lars Ulrich later explained to The Plain Dealer that Mustaine was not included because "you've got to kind of cap it somewhere. Dave Mustaine never played on any METALLICA records. No disrespect to him. But there [were] half a dozen other people that were in the lineup in the early days. We thought . . . the fair thing to do would be to include anybody that played on a METALLICA record." He added: "Dave Mustaine was in the band for 11 months, predominantly in 1982... I'm not trying to play it down. I have nothing but respect and admiration for his accomplishments since."