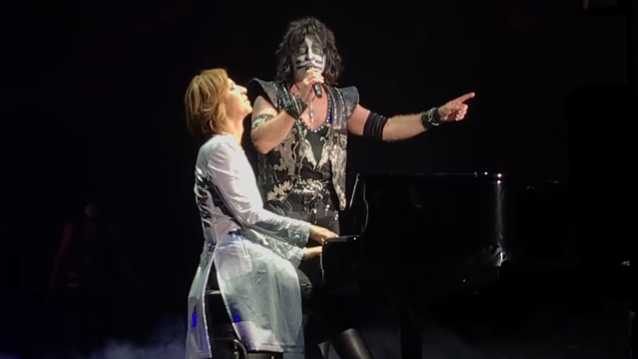 A few minutes after KISS left the stage following the completion of the band's regular set, Paul Stanley re-emerged and told the crowd: "Today is a very special day for us. We're going to play with a good friend and the biggest rock star we know in Japan. Do you know who we're talking about? Yoshiki! Yoshiki will do us the honors. He will play piano for us."

The crowd erupted in cheers as Yoshiki took a seat at the piano for a rendition of KISS's most classic ballad "Beth", featuring drummer Eric Singer on lead vocals. Yoshiki then took Singer's spot behind the drums to close the show with KISS's party anthem "Rock And Roll All Nite".

Yoshiki, who has often cited KISS as an influence, previously covered the band's "Black Diamond" on the 1994 tribute album "Kiss My Ass".

The X JAPAN leader will reportedly perform with KISS again at the latter band's December 17 show at the Kyocera Dome in Osaka.

KISS kicked off its Japanese tour on December 8 at Xebio Arena in Sendai. The show was KISS's first as a four-piece since the band was forced to cancel its tour of Australia and New Zealand after Stanley was diagnosed with a bad case of the flu.

KISS's current lineup consists of original members Stanley and bassist/vocalist Gene Simmons, alongside later band additions, guitarist Tommy Thayer (since 2002) and Singer (on and off since 1991).