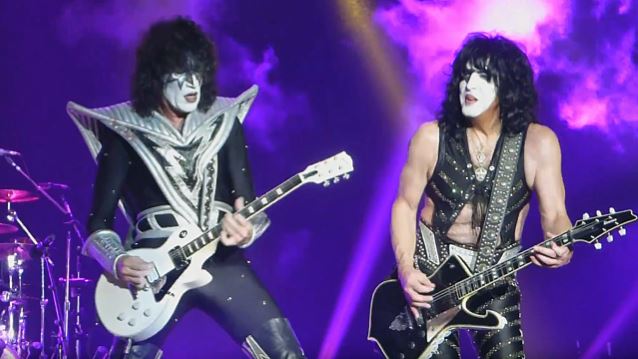 KISS Joins Forces With SUNDANCE HEAD On 'The Voice' Finale

KISS joined Sundance Head on the Season 11 finale of "The Voice" on Tuesday night (December 13) to perform a medley of some of the band's biggest hits. They juxtaposed the songs "Rock And Roll All Nite" and "Detroit Rock City" in a very unique performance that marked the iconic rockers' first-ever appearance on the highly rated reality singing competition.

Head raved about the experience in advance of Tuesday night's finale. "It's crazy, man! I don't know how to do it, really," he told Hollywood Life. "We had rehearsal already and I was just blown away because these guys are so nice. You know, they're rock gods and they're trying to tell me when I'm supposed to sing and I'm just sitting there amazing that they're right there on stage with me. It was really surreal, man, to be up there at rehearsal and hear them start 'Detroit Rock City' and I could just feel the risers shaking from the drums."

At the end of last night's broadcast, Head was crowned winner of "The Voice". The 37-year-old celebrated his victory by singing his original single "Darlin' Don't Go".

Head previously competed on Season 6 of "American Idol", placing in the Top 15. He subsequently recorded for Universal Motown.

Sundance was a favorite to win "The Voice" ever since he performed Otis Redding's "I've Been Loving You Too Long" for his "Blind Audition."