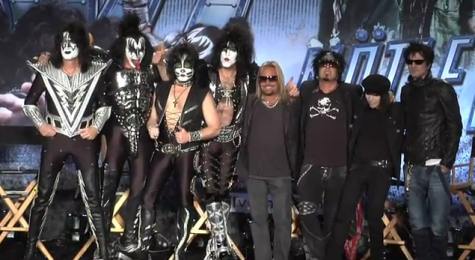 On March 20, Carla Harvey of the BUTCHER BABIES and Revolver TV conducted an interview with MÖTLEY CRÜE's Tommy Lee and KISS' Eric Singer about their upcoming co-headlining tour — dubbed simply "The Tour" — which will kick off on July 20 in Bristow, Virginia. You can watch the chat below.

"The Tour" is currently scheduled to wrap on September 23 in Hartford, Connecticut. Although the bands are officially co-headlining the tour, MÖTLEY CRÜE will open for KISS each night.

KISS bassist/vocalist Gene Simmons told The Pulse Of Radio that attending a KISS concert should be viewed as nothing less than a religious rock experience. "There's something else going on, that somehow words don't really get to — in the same way that, perhaps, when you think about a, a Southern Baptist church revival," he said. "Your spirit is lifted when you walk out of there. You feel glad to be alive another day. I'd like to think that when you leave our show, you feel exhilarated — physically exhausted, but there's something to talk about."

MÖTLEY CRÜE bassist Nikki Sixx told The Pulse Of Radio that the band always has one goal whenever it goes onstage. "If we're the greatest we can be, that's exciting, and that's what I believe that Mick (Mars) and Tommy (Lee) and Vince (Neil) all want too," he said. "They want to be the greatest rock band that MÖTLEY CRÜE can be. That's why we always try to come up with new, twisted versions of our production, and I think our shows are so potent and, I think, contagious. It's fun and it's horrifying all at the same time."