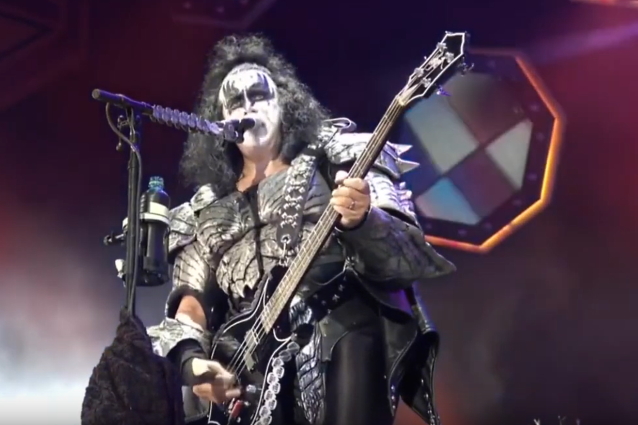 KISS cleaned up its act for tonight's New Year's Eve live pay-per-view performance in Dubai, United Arab Emirates, apparently out of respect for local customs and beliefs. Gene Simmons's blood-spitting stunt was missing during his bass solo, and the words "bitch" and "virgin soul" were removed from the lyrics of "100,000 Years" and "God of Thunder", respectively, the latter replaced by "sacred soul." Other songs reportedly had minor lyrical changes as well.

According to BBC, Dubai is very conservative when it comes to bad language. Swearing, profanities, insults and "all kind of vulgar language" are considered obscene acts — as is making rude gestures — and offenders can be fined or jailed.

Saying "fuck" is a crime in Dubai as the swear word "disgraces the honor or the modesty" of a person according to Article 373 of the UAE Penal Code.

Landmarks Live Presents produced the KISS show, which attempted to set the world's record for largest pyro. The $10 million spectacular was filmed with more than 50 4K cameras and 360-degree views and was held on a massive 250-foot stage at The Royal Beach at Atlantis.

The @kiss live stream from Dubai is NUTS!! Highly recommended!! @PaulStanleyLive sounds great and @genesimmons is the best bass player ever.... pic.twitter.com/aeAAGLer3q

How respectful to change the lyrics and skip the blood! @genesimmons WE LOVED THE WHOLE SHOW! #KISS2020Goodbyepic.twitter.com/WnFxHPE3C1

What is Gene singing instead of "virgin soul"? #KISS2020Goodbye@KISSpic.twitter.com/kbNwVfCjPQ

Rob you of your "virgin soul", replaced by "sacred..."

"Sacred goal" instead of "virgin soul".

Why was “sacred soul” used instead of “virgin soul” during GoT?