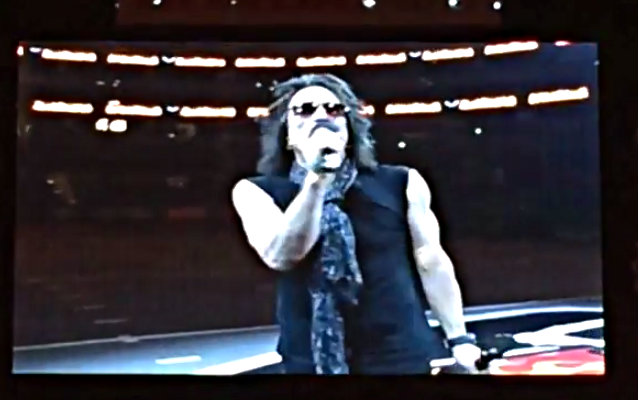 KISS' PAUL STANLEY: 'The ROCK AND ROLL HALL OF FAME Hates Us'

KISS guitarist/vocalist Paul Stanley has once again slammed the Rock And Roll Hall Of Fame, saying that the organization "hates" the band and that the Hall Of Fame had "no choice" but to induct KISS after the group's fans demanded it.

In his halftime speech during yesterday's (Saturday, April 26) LA KISS Arena Football League game against the San Jose SaberCats at the Honda Center in Anaheim, California, Stanley — who brought out his Rock And Roll Hall Of Fame award and was holding it in his left hand — said (see video below): "I want you to know something, in case you didn't know already. The Rock And Roll Hall Of Famehates us. You've gotta know that when it takes 14 years to get invited to a party, they don't want you at the party, but you insisted, you demanded, and they had no choice. This is your award. Nobody sitting behind a desk with a suit and tie is gonna tell you what rock and roll is. You are the ones who decide, and we honor you. And it is my pleasure and my privilege to say thank you for this award."

Stanley's feud against the Rock And Roll Hall Of Fame recently turned personal against the Hall's co-founder, Rolling Stone owner and publisher, Jann Wenner. Most KISS fans were expecting that with the honorable way all four co-founding members acted towards each other on April 10 during the band's induction, that the controversy between Stanley — who rejected the Hall's insistence that only the four original co-founders be inducted — was put to rest.

During his brief acceptance speech, Stanley couldn't help but take a few shots at the Hall and its voting committee, who had passed over inducting KISS every year since 2000, saying, "Here we are, basically inducted for the same things that we were kept out for. The people are speaking to the Rock And Roll Hall Of Fame, and what they're saying is that they want more. They don't want to be spoon-fed with a handful of choices. The people buy tickets, the people buy albums, the people who nominate do not. Let's not forget that these are the people who make it all possible. We just benefit from it. I am here tonight because of the people who inspired me, but I am also here because of the people I inspired. So God bless you all. It's a wonderful night."

Stanley's two tweets from April 12 that took a decidedly unforgiving and personal twist, first saying: "Our treatment at the RRHOF confirmed my worst suspicions. Wenner and the rest are spineless weasels."