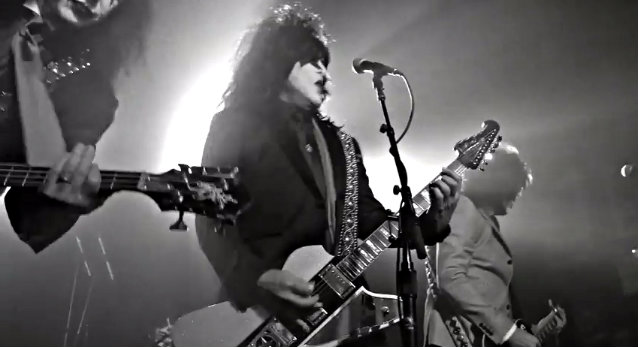 The latest campaign for the John Varvatos brand features none other than legendary rockers KISS.

According to Women's Wear Daily, the ads, which were shot in black-and-white by rock photographer Danny Clinch in the DUMBO area of Brooklyn, were inspired by the group's "Dressed To Kill" album. The musicians were photographed in full makeup wearing Varvatos suits.

Stephen Niedzwiecki, founder and chief creative officer of Yard, Varvatos' agency, told Women's Ear Daily: "Throughout the years, John and I have always tried to work with musicians who are iconic, but not necessarily on the tip of your tongue or someone you would expect in a men's fashion campaign.

"KISS was known for a specific style as a band. Not only were they innovative and break through with their music at the time, they were also style icons.

"KISS's sense of style not only inspired future musicians, but John and creative people of all types. And it's been important that every person we've shot over the years represents both a breakthrough figure in the music industry and, style-wise, has created a point of view for themselves.

"KISS's look wasn't something you could wear to a Bar Mitzvah, but if you asked people what the band looked like, they would certainly be able to tell you. They created this spectacle in music and had an overpowering sound and sense of showmanship, but at the same time were really well-educated, smart men with successes outside of music."

Varvatos recently invited 200 guests to his upscale boutique at boutique at 315 Bowery in New York City, the space that formerly housed the seminal underground music club CBGB, for an intinate performance. The guests were not told whom they were about to see.

A three-minute video shot at the event can be seen below.

John Varvatos — the man and the brand — has ties to the world of music that run deep. An avid fan of such bands as LED ZEPPELIN, THE WHO, THE REPLACEMENTS, and THE NEW YORK DOLLS since his teen years growing up in Detroit, Varvatos features legendary rockers in his advertising campaigns. The ads, photographed by Grammy-nominated music documentarian Danny Clinch, have showcased Slash, Ryan Adams, Alice Cooper and Jimmy Page, wearing Varvatos' signature designs. In addition, Varvatos has played host to an array of legendary rockers, including THE NEW YORK DOLLS who performed at the launch of the Converse by John Varvatos clothing collection, and Perry Farrell at a benefit for the VH1 Save The Music Foundation, a charity of which John is also a board member.