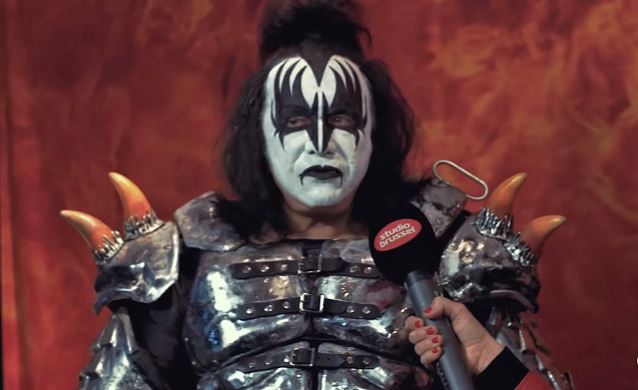 Sofie of Studio Brussel conducted an interview with KISS bassist/vocalist Gene Simmons and drummer Eric Singer when the band played at the Graspop Metal Meeting in Dessel, Belgium on June 19. You can now watch the chat below.

Elaborating on his controversial "rock is dead" remark from last year, Simmons said: "The biggest bands in the world are not 20 years old. There are no big new bands."

Asked if he think newer bands are simply less creative than the artist from the earlier generations, Simmons responded: "It's not that. It's just there's no record industry. You hurt the thing that you love. The fans killed record companies. Record companies paid new artists to come out."

Added Eric: "You took away the developmental aspect. Bands used to struggle, play, tour… Maybe by the third or fourth record, they'd start gaining some momentum and get famous and become well known around the world. Now, what record label is there to give the infrastructure to support for three albums, or four albums, before the band finally makes it. It doesn't exist anymore. That's the hard part. The talent is there. Maybe even more talent than ever."

Continued Gene: "[There are] fifty thousand people over there [at the Graspop Metal Meeting festival]. Should they get in for free, or do they have to pay?"

When the interviewer responded that "nothing is for free," Gene said: "Yes, it is. You can download and you can fileshare for free. And so you're killing the next new band — you're killing them. It doesn't affect us; we've been around 41 years. But it's very sad for a new band. We want the baby bands to succeed."

Added Eric: "I think people take this out of context, and take the wrong meaning. When Gene says, 'Rock is dead,' it doesn't mean that there's not great talent, or great rock musicians, or great bands. It means the chance for those bands to become the next BEATLES or the next SABBATH or the next big thing, you've taken the opportunities away from them. You've made it so… It's so hard to get anywhere in this business, and it's gotten harder because of this. That's the point. The talent is there. We know it. Go on YouTube. You can see all these amazing kid musicians now that play phenomenal. But it's gonna be tough for them to make it. Most people think, 'Oh, that kid's gonna be a star. Look how great he is.' But if people aren't willing to pay and support these people to have a career, how are they gonna make a living?"

Continued Gene: "[People say] it's not all about money, it's not all about… No. Yes, it is… You wanna get into your car and you wanna drive. You have to buy fuel. If you steal the fuel for free, he's out of business, he stops bringing fuel, and then nobody gets fuel. You're killing new bands. You're killing them. Not corporate entities. The fans are killing new bands, because they're not paying for the music. It does not affect us; we're not complaining. But it's bad for new bands."