Puma has once again teamed up with Paul Stanley for a collection.

After previously collaborating in 2018 on a range of sneakers, the KISS frontman and Puma have now released today a new capsule of footwear, apparel and accessories retailing from $50 to $130 in stores and online at Puma.com.

The company say in a statement: "Puma is teaming up once again with one of the most influential rock artists of all time — Paul Stanley of KISS.

"Known for his theatrical style and iconic songwriting, Stanley dominated the hard rock and glam scene of the '70s and '80s and continues to be a musical legend to this day.

"His latest collection features Puma silhouettes decked out in a striking mix of animal prints, Stanley's signature stars, and hits of silver."

Stanley tweeted a picture of himself wearing a pair of the sneakers and wrote in an accompanying caption: "Lovin' my Paul Stanley PSD Pumas! Shoes, tracksuits, sweatshirts, t-shirts… Going fast and all are awesome."

According to Footwear News, the "Ralph Sampson" mid sneakers colorway feature a high-top silhouette coated in mixed animal prints with a star-studded Formstrip, an extra-long tongue and two metallic silver hook and loop straps. The style sells for $130.

A second colorway, the "GV Special Leopard" low-top sneakers, have a metallic perforated upper with stud detailing and a leopard-printed midsole; they retail for $90. The same silhouette also comes in a "GV Special Zebra" colorway with a black forefront, leopard back paneling and a black-and-white zebra-striped midsole. These sneakers retail for $90. 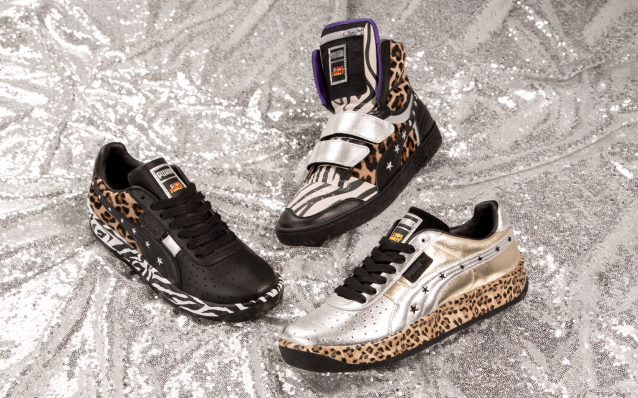