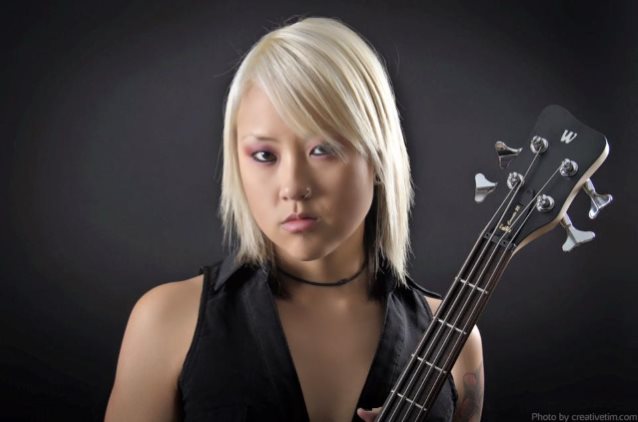 Trish Doan (a.k.a. Trisha Jai-Mee Doan),bassist for the Canadian metal band KITTIE, has died. She was only 31 years old.

The news of Doan's passing was first revealed by KITTIE on the group's official Facebook page. The band wrote: "It is with immeasurable sadness that we share news of the passing of our sister and best friend Trish Doan.

"Finding the right words is tough. She was so bright and vibrant and talented and we loved her and still do. She was so much more than just a musician or member of the band. She was our blood, our sister and family. Finding our way without her will be challenging, like a ship without a lighthouse, and we are devastated.

Former KITTIE bassist Ivy Vujic Jenkins, whose tenure in the band was bookended by Doan's two stints, paid tribute to her colleague, writing on her Facebook page: "Anyone who has ever met Trish Doan knows that she was one of the sweetest, kindest, most down-to-earth people on this planet. I loved seeing her beautiful photos of Australian sunsets and city skylines, and nerding out about bass gear and geeky tech stuff.

"Everyone loved Trish more than she ever realized. She has left an imprint on so many lives. Her memory and legacy will outlive her physical form for many years to come.

"Much love to Trish's family, friends and all of the world that was touched by her presence.

"Trish, you are loved and greatly missed."