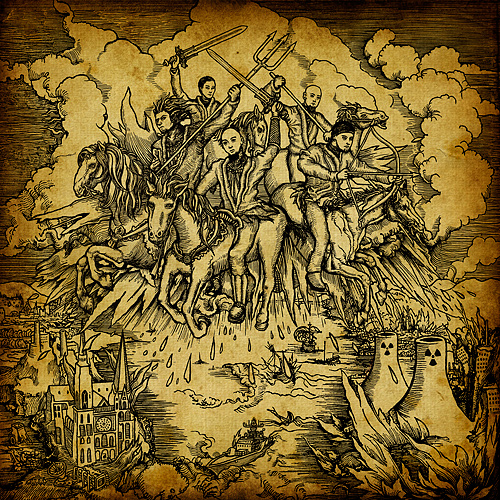 An e-card for "The New Dark Age", the third album from Finnish power metallers KIUAS, is available at this location.

"The New Dark Age" was released in Finland on March 5. The track listing for the CD is as follows:

01. The Decaying Doctrine
02. Conqueror
03. Kiuas War Anthem
04. The New Dark Age
05. To Excel and Ascend
06. Black Rose Withered
07. After the Storm
08. Of Sacrifice, Loss and Reward
09. The Summoning
10. The Wanderer's Lamentation
Bonus track for Japan release:
11. Towards the Hidden Sanctum

According to the band, "The cover art is the product of the visionary artist/musician Niklas Sundin (Cabin Fever Media). The picture is an original drawing in the style of reneissance woodcut illustrations, and portrays the members of KIUAS as the four — or in this case five — horsemen of the Apocalypse with a dismal landscape that combines ancient and modern times."

A video for the song 'Conqueror' was shot on February 18 with Owe Lingvall of Village Road Film.

"Of Sacrifice, Loss and Reward", the new single from KIUAS, recently entered the single chart in the band's home country at position No. 1.

KIUAS' second full-length album, "Reformation", was released in May 2006.