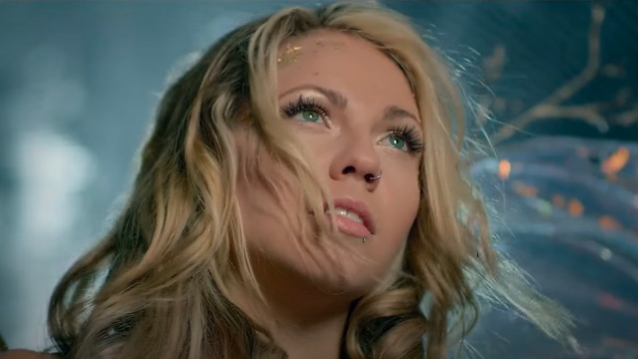 KOBRA AND THE LOTUS Singer Is Working On 'Bluegrass,' 'Folky' And 'Gospelish' Solo Project

KOBRA AND THE LOTUS lead vocalist and songwriter Kobra Paige is working on a solo album, to be released sometime in 2021.

Paige discussed the project when she was a guest on a recent episode of ELUVEITIE's "Corona Talk", hosted by Fabienne Erni.

She said (see video below): "I started another album that's just different work completely two years ago in Nashville. And then I stopped working on it because I put everything towards making the new album with the guys, [2019's] 'Evolution', for KOBRA AND THE LOTUS. And now I've actually had time in this quarantine to start picking it up where I left off. So I started to work on more music again — over Zoom sessions with people, which has worked really well. I've been quite surprised."

Speaking about the LP's musical direction, Kobra said: "It's a project that has a lot of bluegrass, folky instruments in it. It's based around 12-string acoustic, dobro guitar… So those sounds, slide guitar — things like that. It's definitely been more of a roots, crossroads, gospelish… It's all about just expressing the soul in a different way — in a very raw way as well… It's something that's gonna be separate from the band… This is just me working with different people to create this solo record."

As for when fans can expect the album to see the light of day, Kobra said: "I hope to release it in the New Year, if I can record it and do that this year, in the fall. But we'll see how this all works out with this, what's going on right now."

The couple got engaged in June 2019 when he popped the question in his hometown of Stockholm, Sweden.

Tommy and the Calgary, Alberta, Canada native apparently met when KOBRA AND THE LOTUS supported KAMELOT on a European tour in 2015. Since then, Kobra has frequently appeared as a guest vocalist at KAMELOT shows.

KOBRA AND THE LOTUS's latest album, "Evolution", was released in September 2019 via Napalm Records. For the record, KOBRA AND THE LOTUS enlisted the services of producer Michael "Elvis" Baskette, who has previously worked with ALTER BRIDGE, SLASH and SEVENDUST, among others.