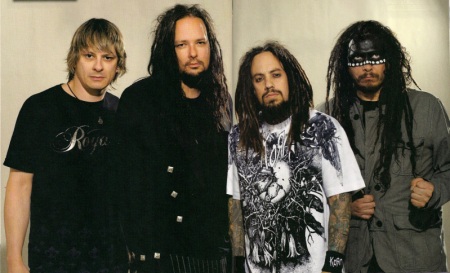 Motivated by the BP disaster and its devastating effects, heavy rock outfit KORN, which has sold more than 30 million records worldwide, takes a stand by launching a boycott against using the company's gasoline while on tour this summer. The band has formally announced that it will not be fueling any of its touring vehicles with BP products and is strongly encouraging other touring artists to do the same.

"The daily images are hard to watch," says KORN frontman Jonathan Davis. "We need to do our part to let BP know there are consequences for causing something like this. We want to send a message to corporations like BP so that they will take more preventative measures in the future. The more costly their punishment, the more money they will spend to make sure disasters like this don't happen again. It's plain and simple capitalism."

In a timely coincidence of life imitating art, KORN's new album artwork, photography and stage set imagery reference the band's hometown area near Bakersfield, California and its bleak landscape littered with oil rigs. The video for the first single "Oildale (Leave Me Alone)" reveals a poverty-stricken area situated among the rich oil fields and tells a story of a young boy's desire to escape. The video story echoes the band's own struggle out of Bakersfield. Davis adds, "It was one thing for us to grow up near such poverty. But the situation in the Gulf takes things to a whole new level where people's lives and livelihoods are affected forever."

KORN will spend their summer as a headliner on the third annual Rockstar Energy Drink Mayhem Festival playing in 14,000-to-30,000-seat amphitheaters. "We urge the other acts on Mayhem and anyone on tour this year to be with us on this," Davis also said.

KORN is touring to support its upcoming album, due out July 13 via Roadrunner Records. The CD's title, "Korn III – Remember Who You Are", is a reference to the band's past and is a nod to its roots.