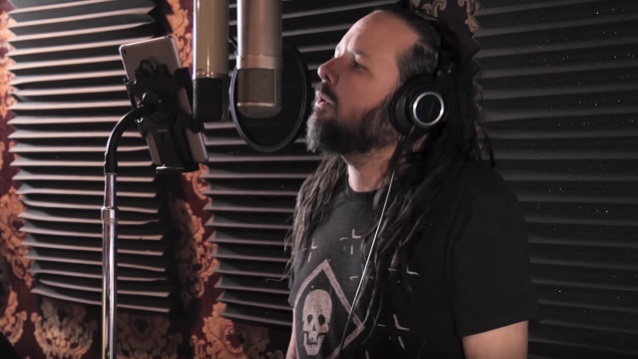 KORN frontman Jonathan Davis recently spoke to Philadelphia's 93.3 WMMR radio station about his upcoming solo album, which is tentatively due this spring via Sumerian. Asked how his solo record will be different from the KORN material, Davis said: "It's completely different. It's a different thing. It's something I've been working on for 10 years. It's just a crazy, different world music hybrid of all kinds of things, and [there are] all kinds of different players who play on the record. And I'm really proud of it. Like I said, I've been working on it really hard."

Regarding why it took so long to complete the solo album, Davis said: "I did most of it back in… I started it in '07 and '08. I was signed to another record label, and, unfortunately, the people that signed me left. Some other people came in, they wanted to do it, and they ended up not doing it, so I got the record back. And then, [I went through] a few different managers and stuff, so it's just the same thing — they want the KORN machine moving. [Laughs] So finally I've got a break now, and I'm, like, ' I wanna do this now, guys. Let's do this.' So we're doing it."

Davis also talked about why he chose to make a solo record instead of using the material for KORN. "'Cause it's completely different — it's not for KORN," he said. "You've heard [the recently released single] 'What It Is' — that's not a KORN song. So this is stuff that's completely different. There's stuff I've brought to KORN before, like from these sessions, the song 'Take Me', on our last record [2016's 'The Serenity Of Suffering'], was one of these songs, but we took it and the guys — [KORN guitarists] Head and Munky — got it, they tore it apart and made it their own. It's totally different. Sometimes it works. But the majority of the stuff wouldn't have worked for KORN."

According to Jonathan, the songs that ended up making his solo album were written in part while he was on tour with KORN. "I write every night of the road," he explained. "KORN's been on the road for a long time. So when everybody else is… well, not anymore, we don't do that [right now], but back in the day, when everyone was partying and doing their thing, for me to stay sober and keep doing it, I'd just feed myself with my new addiction, [which was making] music. So I would just write and write and write, and I would write all kinds of different songs just as an exercise. That's what got me through the night. So that's just how this all came together. And some songs end up KORN songs, some songs don't."

Asked if the melodic vibe of "What It Is" is indicative of what his solo album sounds like, Davis said: "Yeah, definitely. It's really melodic. It's a record you put on to make you go somewhere. It's one of those records you've just gotta listen to it, it puts you in a certain vibe and it takes you away out of yourself. It's very different and gothic. I don't even know how to explain it. You'll all have to hear some more songs."