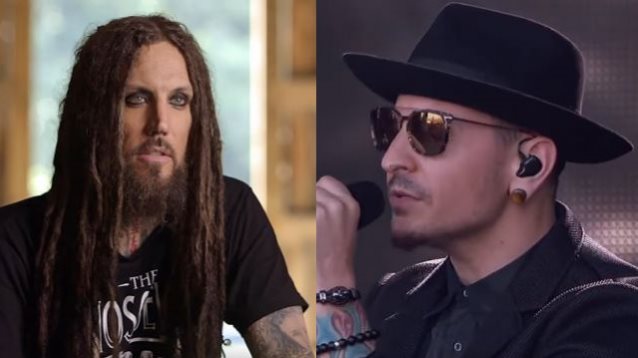 KORN Guitarist Reacts To CHESTER BENNINGTON's Death: 'Giving Up On Your Kids, Fans And Life Is The Cowardly Way Out'

Brian "Head" Welch says that he is "pissed" about the death of Chester Bennington, explaining that taking your own life "is the cowardly way out."

The LINKIN PARK singer died of an apparent suicide by hanging Thursday morning. He was 41.

Earlier this afternoon, the KORN guitarist took to his Facebook page to write: "Honestly, Chester's an old friend who we've hung with many times, and I have friends who are extremely close to him, but this is truly pissing me off! How can these guys send this message to their kids and fans?! I'm sick of this suicide shit! I've battled depression/mental illness, and I'm trying to be sympathetic, but it's hard when you're pissed! Enough is enough! Giving up on your kids, fans, and life is the cowardly way out!!!"

Welch later added: "I didn't mean to sound insensitive about Chester. Just dealing with a range of emotions today.

"Love you, Chester. I'm pissed that you did this, but I know this could have been me back in the day after getting wasted one night."

Chester's LINKIN PARK bandmate Mike Shinoda confirmed reports of Bennington's death, tweeting: "Shocked and heartbroken, but it's true. An official statement will come out as soon as we have one."

According to TMZ, Chester was scheduled to join his bandmates for a photo shoot in Hollywood today.

Sources told the site Chester arrived back in L.A. Wednesday from Arizona, where he and his wife were spending time.

One of Bennington's bandmates showed up at the singer's Palos Verdes Estates home shortly after police arrived, according to the site. He said he was supposed to be driving Chester to the photo shoot and was "absolutely shocked."

LINKIN PARK was set to go on tour starting July 27 in Boston, with dates stretching into the fall.

"His riveting stage presence made every live performance magnetic, earning him millions of fans around the globe," Portnow said. "Having put as much passion into charitable causes as he did his musical craft, we were honored to pay tribute to him at our 2013 MusiCares MAP Fund benefit concert, where he lent his time and talents to help raise money to assist members of the music community with the addiction treatment process."

Honestly, Chester's an old friend who we've hung with many times, and I have friends who are extremely close to him, but...