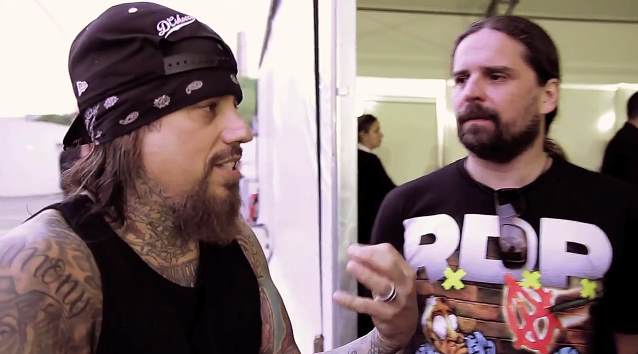 A five-and-a-half-minute clip featuring behind-the-scenes footage of how this unique collaboration came about can be seen below.

KORN singer Jonathan Davis was featured as a guest on the track "Lookaway" — along with Mike Patton of FAITH NO MORE — on SEPULTURA's 1996 album "Roots".

Speaking to ARTISTdirect, former SEPULTURA frontman Max Cavalera stated about the recording sessions for "Lookaway": "Mike Patton was on the song, and Jonathan's a huge FAITH NO MORE fan. He was actually freaking out that Patton was there. He was really nervous, which was actually kind of funny. He kept chewing on his hair the whole time he was in the studio. [Producer] Ross Robinson teased him at one point and told him to calm down. [laughs]"