Although the official announcement is not expected until tomorrow (Friday, February 13), the following bands are slated to appear at the third annual Rock On The Range festival, set to take place Saturday, May 16 and Sunday, May 17 at Columbus Crew Stadium in Columbus, Ohio (in no particular order):

More artists will be added.

The first Rock on the Range was held on May 19, 2007. The sold-out festival ran all day, beginning around noon and ending after 11:00 p.m. The second festival was a two-day event held on the weekend of May 17-18, 2008. This show had the very first STONE TEMPLE PILOTS performance in seven years, ending the band's hiatus.

The festival usually draws around 35,000 fans onto the Columbus Crew Stadium grounds. Two stages are set up: The main stage is inside the stadium at one end of the soccer field, and the second stage is in the parking lot just outside the stadium. The typical ticket price in the past has been $50-65 per day, depending on whether attendees want field access or not. 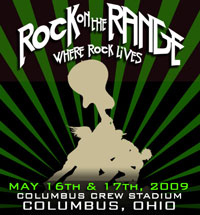