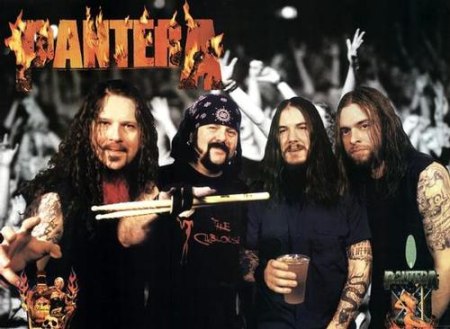 On December 8, it will be eight years since PANTERA guitarist "Dimebag" Darrell Abbott was tragically taken from us. However, ARTISTDirect.com editor-in-chief Rick Florino decided to ask a myriad of artists about PANTERA's impact on them. So many of them cite "Vulgar Display Of Power", celebrating its 20th anniversary this year, as a life-changing milestone.

Jonathan Davis (KORN): "I remembering hearing the groove metal, crunchy guitars, and Philip Anselmo going off. There was this intense aggression, but you could move and dance to the music. I absolutely loved that groove element. 'Vulgar Display Of Power' really got me into metal. HELMET was another one of those bands along with PRONG. I love swinging groove, and PANTERA were the kings of that. Every time KORN played in Dallas, Dimebag Darrell and Vinnie Paul would come out and see our shows. They were good times. Dimebag did not deserve what he got. I got to sit down with Philip one time, and I just thanked him. I said, 'You're the one who inspired me to do metal music, and I just want to thank you.' He was like, 'Man, that's crazy!' I like all of his side projects too. There's one band he did called CHRIST INVERSION which is crazy, satanic evil music. It's really cool and dark."

Kerry King (SLAYER): "The first time I heard PANTERA was at a club they were playing. We were going through Texas, and it was a day off before we actually played. I can't remember if somebody suggested we go there or if we ended up there. That's how it went down. That was before 'Power Metal'. Philip was in the band, but I don't think the album was out yet. Philip was awesome, and Dime was awesome. I'm a guitar and vocal kind of guy. I'm extremely happy we were able to do a PANTERA run. At the end of the day, it was the last PANTERA run. I'm glad we got to make that happen. Dime and I wanted to tour together forever. After that, we did some of DAMAGEPLAN's last run. We had a lot of experience with the PANTERA and DAMAGEPLAN boys."

Mike Mushok (STAIND): "The first time I heard PANTERA was 'Vulgar Display Of Power'. The same friend who introduced me to METALLICA played it for me. I remember going out and buying it as soon as I could. It's funny because a friend of mine had 'Power Metal', the album before 'Cowboys From Hell'. I was like, 'This is the same band?!' After I got 'Vulgar', I went back and got 'Cowboys From Hell'. I definitely wore out those records. We never played with PANTERA. We played with DAMAGEPLAN a couple of times though. In fact, about six weeks before what happened in Ohio, we were playing in Albuquerque, and it was a fly date for the DAMAGEPLAN guys. I spent the day hanging out with Dimebag Darrell. I remember the last thing I said to him. I've never done this either. He was watching our set from the side of the stage. They were getting ready to leave and catch a flight. I walked across the stage in between songs and said, 'I can't tell you how much of an honor it is for me to have you standing here right now.' To me, he's one of the best. That was the last thing I said to him and the last time I saw him. I was thankful for that day and the few times I got to hang out with him because he really was a beautiful person. I never talk to anybody during a set. Looking over and seeing him standing there while we were playing meant a ton to me. They're a band we used to cover. I watched all of their videos. PANTERA were just amazing. They were a big influence."

Ivan Moody (FIVE FINGER DEATH PUNCH): "I don't think there will ever be a band that compares to PANTERA. In my book, they are the icon metal band of all time. Their catalog speaks for itself. What the four of those guys did for music in general is beyond incredible. Philip's lyrical ability and what Dimebag did as player are incredible. There is no torch to be handed down from PANTERA. PANTERA is one of our biggest influences as it should be for anyone who listens to rock 'n' roll. I first heard PANTERA after getting out of a detention center as a kid. I caused a little mischief. I had a Walkman at the time, and I went to a store. I saw this cassette on the shelf, and it said 'Cowboys From Hell'. I was like, 'Dude, that's badass.' There were only two copies of it so I knew it was underground at the time. The second I put it in, my entire life changed. My soul lit up. My eyes turned red. That was it for me. They'd become the greatest band on earth to me. You go down the line on the CD and get to 'Cemetery Gates'. I just freaked out like, 'Wow, somebody can make good rock 'n' roll and still incorporate extremely painful misery and have a sense of relief.' They kept getting bigger and better from there. My god, 'Vulgar Display Of Power' is still one of the greatest albums ever. Of course, my favorite is 'Far Beyond Driven'. They just nailed it on 'The Great Southern Trendkill' too. Anytime I saw that band live, it was absolutely jaw-dropping. I've never had an experience like that, and I've seen thousands of bands from RAMMSTEIN, TOOL, and METALLICA to SLIPKNOT and KORN. Those are all phenomenal acts, but I never missed a PANTERA show. PANTERA was the beginning and end for me."

You can find the entire feature at ARTISTDirect.com.