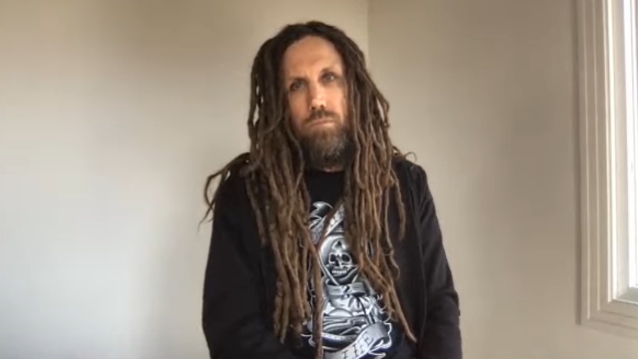 KORN's BRIAN 'HEAD' WELCH: 'We're Trying To Come Up With Something Fresh And New For 2021 And Beyond'

KORN guitarist Brian "Head" Welch, who is currently promoting the second album from his LOVE AND DEATH side project, spoke to U.K.'s Rock Sound TV about the band's plans for the coming months. He said (see video below): "We've got some big plans coming this year we're gonna announce. I've been flying all over the place and seeing the KORN guys. And we have some really exciting news coming this year. So our fans are gonna be ready to do some cool stuff with us this year.

"A lot of stuff has been going on," he continued. "But, yeah, we're trying to come up with some unique things. I know a lot of people are gonna come out with new music, because you're stuck at home, and there's nothing else to do but write music, so it's pretty obvious that people are working on music. But we're coming up with a lot more cool ideas than just music. We're just really brainstorming about how to do something new and fresh. 'Cause we've been around so long. You've got bands like TOOL and SYSTEM OF A DOWN — these other bands that go away. Even DISTURBED was gone for, like five years. BREAKING BENJAMIN was gone four years or something. KORN is always just 'go, go, go.' And so we're really just regrouping and trying to come up with something fresh and new for 2021 and beyond, to just make it exciting again. 'Cause we're still excited. And so we wanna make things exciting for our fans and just have a good time. So we'll be announcing something pretty soon."

In October, KORN and free-to-play video game titan World Of Tanks Blitz launched a special Halloween collaboration, revealing the music video for "Finally Free", a track featured on KORN's latest studio album, "The Nothing". Thee months earlier, KORN released a cover of THE CHARLIE DANIELS BAND classic "The Devil Went Down To Georgia", featuring a guest appearance by rapper YelaWolf, exclusively via Bandcamp. All proceeds from the track were donated to Awakening Youth, a nonprofit organization devoted to young people faced with the loss of a parent due to divorce, addiction, death, being surrendered for adoption, or other reasons.

"The Nothing" was released in September 2019 via Roadrunner/Elektra. The follow-up to 2016's "The Serenity Of Suffering" was once again produced by Nick Raskulinecz.