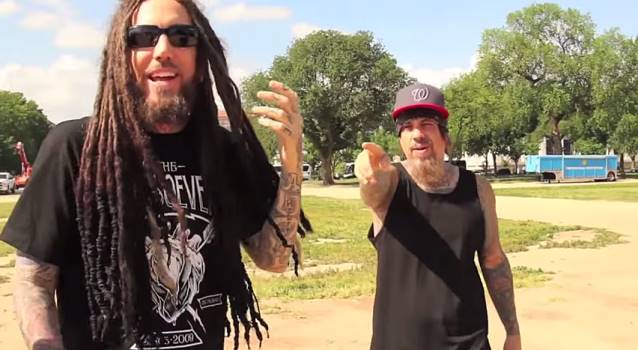 KORN guitarist Brian "Head" Welch and bassist Reginald "Fieldy" Arvizu are featured in the new trailer for the upcoming film "Holy Ghost", which aims to prove that the Holy Spirit is real. The film is being helmed by Wanderlust Productions, which is an independent production company committed to advancing the kingdom of God through the creative use of media and storytelling.

According to the Wanderlust Productions web site: "'Holy Ghost' will take [director Darren Wilson] and his team around the world as they go in search of the nature and evidence of the Holy Spirit. They will explore the role of the Holy Spirit in the arts, ministry, and the Christian life. But as with all of Darren's films, it will be the encounters of ordinary people with the God of the Bible that will take center stage. Darren feels that God is directing him to approach some of the religions of the world and 'introduce them to the Holy Spirit and see what happens.' This will be a film with no script, but will be a visceral, authentic, and wholly unique experience for the viewer."

"Holy Ghost" will receive a digital premiere on August 9.

In a recent interview, Welch stated that, while he is a spiritual man, he hates religion. "I like to get high on something, and when I asked the Lord to come and make his home inside of me, the spiritual high, it's so real," he said.

"And I hate religion — I don't talk about religion at all — but the relationship through Christ is what I found. And I'm totally satisfied. Now I can enjoy raising my kid, I can enjoy jamming with music in KORN, I can enjoy anything I do. It's the best high ever."

In an interview with NewReleaseTuesday.com, Fieldy was asked if he ever reached a point, as many others have, where he thought God couldn't forgive him. "You know, I didn’t have that problem," he said. "Now that I believe in God, it's obvious He's almighty. He created the universe. Because He created something so big, my biggest problems are so small to Him! Once you realize that Jesus died on the cross and forgave you of your sins, you're like, 'Wow, somebody did that for me!' It's pretty crazy to know that someone died for us — yet we're all sinners! I've done so many things and asked for His forgiveness. But even today, I know I'm still going to fall short in certain ways. I'm still a work in progress."