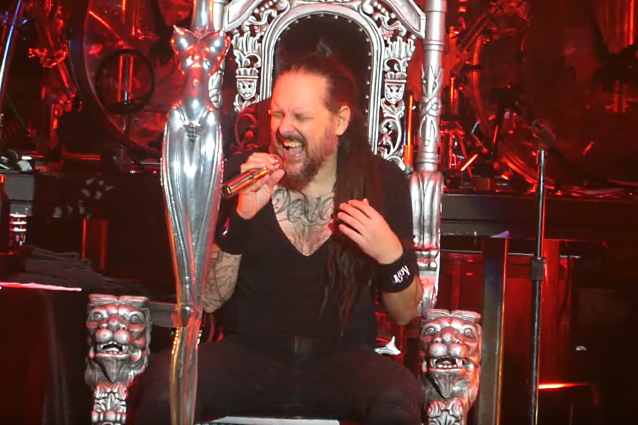 KORN singer Jonathan Davis is still struggling with COVID-19 after-effects, nearly three weeks after it was announced that he tested positive for the novel coronavirus. As a result of his infection, the band postponed six dates and canceled two on its current U.S. tour.

Davis, who was reportedly fully vaccinated, addressed his COVID-19 battle during KORN's concert last night (Friday, September 3) in Burgettstown, Pennsylvania. Prior to launching into the song "Falling Away From Me", Jonathan told the crowd: "It feels so good to be back, y'all. Some of you might know, some of you don't, but I'm recovering. I got COVID, and that shit kicked my motherfucking ass. But I decided I'm not gonna fucking cancel. … So I might be standing up, I might be sitting in my chair, but I'm gonna give you a hundred motherfucking percent. So let's scream and have a good motherfucking time tonight."

At KORN's recent shows, Davis has been taking a seat on a custom throne near the drum riser due to lingering effects of his bout with COVID-19. In video footage of KORN's August 27 concert in Tinley Park, Illinois — his first gig back after revealing his positive diagnosis — Davis could be seen walking slowly around the stage, coughing and appearing to take a minute to catch his breath. According to TMZ, Davis also took occasional hits from an oxygen tank set up near this throne.

In the past a couple of months, a number of other high-profile hard rock and heavy metal artists — including IRON MAIDEN's Bruce Dickinson, TESLA, LYNYRD SKYNYRD, SHINEDOWN and LIMP BIZKIT — have also called off shows or played concerts without members who have tested positive for COVID-19, the disease caused by the novel coronavirus. The cancelations and the increased number of COVID-19 infections are driven in large part by the fact that the delta variant of the coronavirus, now the most common strain circulating in the United States, has a supercharged transmissibility, driven in part by how the mutated virus behaves in the body after infection.

Experts have repeatedly said that a COVID-19 vaccine is the single most important tool for preventing infections and protecting against moderate and severe disease. Some variants, such as delta, may be more likely to cause breakthrough infections, but vaccinations have shown protection against symptomatic disease caused by delta. Unvaccinated people are more likely to be hospitalized or die from COVID-19 than people who are fully vaccinated. In the United States, 97% of the hospitalizations over the past three months, since delta came on the scene, have been in unvaccinated people. Ninety-nine percent of the people who have died of COVID-19 in the last three months were unvaccinated.

Masks reduce the risk of an infected person's spreading the virus and provide some protection for the wearer against becoming infected. A new study found that increased mask-wearing led to a significant reduction in the percentage of people with COVID-19, based on symptom reporting and SARS-CoV-2 antibody testing. The researchers tested both cloth and surgical masks and found especially strong evidence that surgical masks are effective in preventing COVID-19.