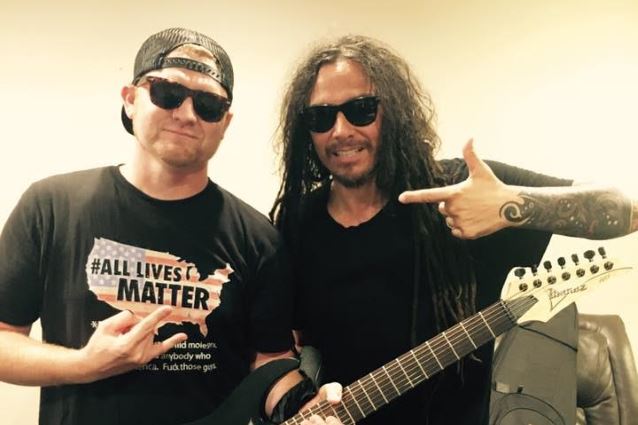 Jake Serd of Centrill 74 Entertainment and 94.9 K-Rock (WRHK) recently conducted an interview with KORN guitarist James "Munky" Shaffer. A couple of excerpts from the chat follow below (transcribed by BLABBERMOUTH.NET).

On what he would attribute KORN's longevity to:

Munky: "I think [it's] just the chemistry and the creative stream that we have together. I think that the material comes from us effortlessly. Sometimes we have those days in the studio where it's, like, 'Hmm…' But if you show up and someone starts playing, you start to kind of get that creative energy flowing quickly and pretty effortlessly. That, and just trusting each other creatively when we wanna try new things. You've gotta kind of let each person in the band experiment — giving each other that freedom, and trying not to be over everybody's neck and down their throat, and giving each other space whenever they need it too."

On what KORN wanted to achieve with its upcoming album, "The Serenity Of Suffering":

Munky: "It's funny, because we met with a few producers. Brian ['Head' Welch, guitar] and I sat down with a couple of different people, and it was just, like, 'Maybe that guy or maybe this guy.' And you look at their body of work that they've done, and everybody's super impressive, at that level. But it wasn't really until we met with Nick Raskulinecz, who came to Bakersfield to meet us. Most of the producers came into town, at our studio there, [to talk to us]. And he really just kind of gave us… He was, like, 'Listen, this is what I've been missing.' And he came at it [from] a fan's perspective. 'Cause he was, like, 'I've been a fan. I was a fan. And here are the things that I'm not hearing from the band.' And I think he kind of stepped out on a limb and took a chance with us by saying that. And some of the stuff was dead-on. He's, like, 'I wanna hear Fieldy's bass. I wanna hear the funky drum thing. I wanna hear the back-and-forth guitar.' He's, like, 'I've been missing that from you guys for the last few records.' Of course, Brian was gone [for several years], so I think just getting the writing oiled again with 'The Paradigm Shift', it was a perfect moment. And he just wanted us… He's, like, 'Everything seems so neat. Your band is not meant to be tight…' We're tight live; you know, we play as we tight as we can. 'But there's an organic thing that's really been missing to your sound, the thing that made me as a fan and your fans and listeners, I think they're missing.' That's his approach. And then he left. And Brian and I were kind of taken aback by some of the criticism, but he was right. He was a lot of fun to work with."

On recording both guitars at the same time on "The Serenity Of Suffering":

Munky: "It's funny, because that was one of those things that was a mistake… It wasn't a mistake. It was a method that our producer Nick decided… We were trying to make this record in between doing the 20th-anniversary shows last year. So every time we came home from the road, we would jump in the studio and try to get some writing done, get some recording done. And he was, like, 'Maybe if you guys record at the same time, it'll save me time and then I can start getting some rough mixes and we can start sending them to Jonathan [Davis, KORN singer] and getting his vibe and seeing if he'll start… just get him to wrap his head around some of the material and kind of unusual structures that we were laying out. And he plugged in the amps and plugged in my amps. We came in and he was, like, 'Check it out. I want you guys to both record at the same time.' And we were, like, 'What? We never did that before? Is that gonna…?' He was, like, 'No, no, no. Just trust me. It's gonna be awesome.' And so, it was challenging, but it gives the album… It was so much fun, and we had… It was challenging… If Head made a mistake on recording, we had to stop and start over… There's a tiny bit — like 99 percent of it was, like, 'Okay, we can fix that.' It really made us play better on the album, and it was a lot of fun. I can't believe we've never done it before until now."

Munky: "Well, there were several [potential singles], and it was kind of difficult to go, 'Okay, if you pick any of these three songs, we're okay with it.' I think Head really wanted this to be the first song that people heard. It's a good introduction to the rest of the album as far as what people can expect, I think."

"The Serenity Of Suffering" is set to arrive on October 21. The follow-up to 2013's "The Paradigm Shift" features a guest appearance by SLIPKNOT frontman Corey Taylor on the song "A Different World".

KORN's current co-headlining tour with ROB ZOMBIE winds down on September 3 in Bristow, Virginia. KORN will then hit the road with BREAKING BENJAMIN, starting September 24 in Fargo, North Dakota.