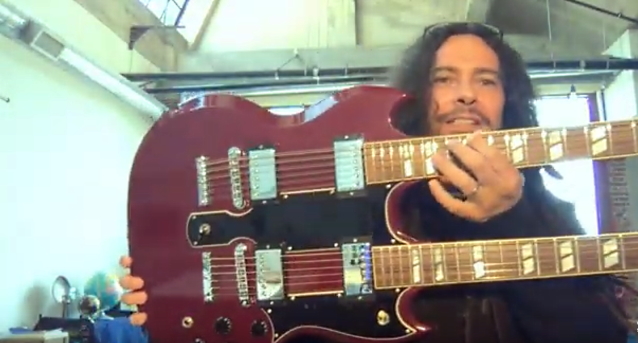 AXS TV puts the spotlight on an eclectic array of passionate collectors and the incredible music items they hold dear in the all-new music memorabilia series "Rock My Collection". The series, which premiered on August 15, is produced by Critical Content, with executive producers Jenny Daly, Tom Forman, R. Greg Johnston, Ahmet Zappa and Matt Pickel.

Hosted by Ahmet Zappa — the best-selling author, producer, musician, and head of the iconic Frank Zappa estate — "Rock My Collection" is a celebration of some of the world's most legendary music artifacts connected to an impressive roster of industry trailblazers. Collectors are invited into the studio each week, joining both in-person and zooming in from their private collection spaces, to showcase their prized memorabilia, share their personal acquisition stories, learn more about the history behind each piece, and ultimately find out its potential value. Ranging from weird and rare to deeply personal and possibly even priceless, the series highlights notable items including a copy of Yoko Ono's book "Grapefruit", signed by Ono and John Lennon on the day he died; Stevie Nicks's stage-used microphone from FLEETWOOD MAC's "Rumours" tour complete with remnants of her lipstick; Tom Petty's scooter; an Italian roadmap signed by guitar great Jimi Hendrix; handwritten lyrics signed by late METALLICA bassist Cliff Burton; a zombie suit from Michael Jackson's "Thriller" music video; a cymbal signed and played by NIRVANA; Bob Marley's first 45, released as "Bobby Martel;" Brian Wilson's 1983 driver's license; love letters written by Axl Rose; and a pair of Elvis Presley oddities that truly must be seen to be believed, among many others.

In a preview clip from this upcoming weekend's episode, James "Munky" Shaffer from KORN shows off his double-neck guitar signed by the legendary LED ZEPPELIN guitarist Jimmy Page.

Regarding how he got Page to sign the guitar, Munky said: "I was on tour, and I was really getting into [LED ZEPPELIN's album] 'Physical Graffiti'. There was a song. I was, like, 'I've gotta learn how to play that song.' And so I wanted a double-neck guitar. We had a tour manager named Eric Barrett, an English guy. We were going through London, and he's, like, 'Guess what. I have a guest — you're never gonna believe it — coming to the show.' 'Okay, who is it gonna be?' He's, like, 'Jimmy Page is gonna fucking come to the show.' And I was, like, 'C'mon!' He knows him; they're friends."

Joining Zappa on this entertaining musical odyssey is Stephen M.H. Braitman of MusicAppraisals.com, an accredited senior appraiser affiliated with the American Society Of Appraisers, who specializes in music archives and memorabilia and has worked directly with many notable artists and estates. Using his encyclopedic knowledge and unparalleled expertise, Braitman delivers a unique perspective on the origins of each item and is on hand to provide a detailed estimate.

"Collecting memorabilia is often an emotional experience for fans and a way for them to connect with their musical heroes on a much greater level," Zappa said. "Some of the collector's priceless pieces on the show are truly moments of rock and roll history that you can hold in your hand, they have the power to teleport appreciators back in time with an all-access pass, right into the lives and careers of some of the worlds most legendary musicians. Each piece has a tale to tell, and I'm excited to be joining forces with AXS TV to discover how these rare items became part of their current owners collection and unearth the stories behind these rocking artifacts for everyone to enjoy."

After appraisal, collectors will have the opportunity to keep their items or put them up for auction. In addition, AXS TV has partnered with auction powerhouse Gotta Have Rock And Roll, a popular online auction house that specializes in music memorabilia, presenting an exciting interactive component that allows viewers to get in on the action and own a part of music history. Viewers may bid on select items by visiting AXS.TV/RockMyCollection with new auctions going live following each premiere episode.

"It's a real privilege to be able to get up close and personal with these items, many of whom have played important roles in the legacies of some of music's biggest names," Braitman said. "It's also great to share in the passion and excitement of these fellow music enthusiasts, and help give them a more complete picture of the items they possess. There are so many iconic pieces to show and stories to tell, and we look forward to sharing them with our viewers when 'Rock My Collection' premieres on August 15."

"Rock My Collection" also features all-access segments highlighting field trips to music landmarks and "instant memorabilia" signings where iconic musicians zoom into the studio to share their own collectible stories, and sign a personal item live on the show. Participants include shock rock pioneer Alice Cooper, beloved HEART founder Nancy Wilson, 4 NON BLONDES founder Linda Perry, alt-rock hero Gavin Rossdale, and rock renaissance man Todd Rundgren. Viewers will again be able to bid on these pieces via the "Rock My Collection" site, with proceeds from the celebrity items going to the National Independent Venues Foundation (NIVF), benefiting the invaluable small music venues and personnel who have been impacted by COVID. Additionally, field trip destinations include tours of the Grammy Museum, with a preview of their upcoming Dave Matthews exhibit; as well as Rockaway Records, home to a world-famous wall of rare BEATLES memorabilia, the "cage" at Gotta Have Rock And Roll with items belonging to Prince, Michael Jackson, Drake, and more; and an exclusive look inside the Zappa estate, honoring the enduring life and legacy of music mastermind and the host's father Frank Zappa.

"'Rock My Collection' is an all-out celebration of music artifacts and the passionate collectors who love them. These storytellers provide a unique glimpse into the origins of these rare and unique pieces that represent unforgettable moments in music history," said Sarah Weidman, head of original programming, development and multi-platform content for AXS TV. "Ahmet and Stephen are true music lovers with extensive knowledge of music history and memorabilia. Their undeniable chemistry and personable charm adds a fresh and fun perspective. Additionally, AXS TV is excited to partner with Gotta Have Rock And Roll to give viewers a chance to take some of these incredible pieces home to add to — or even start — collections of their own."