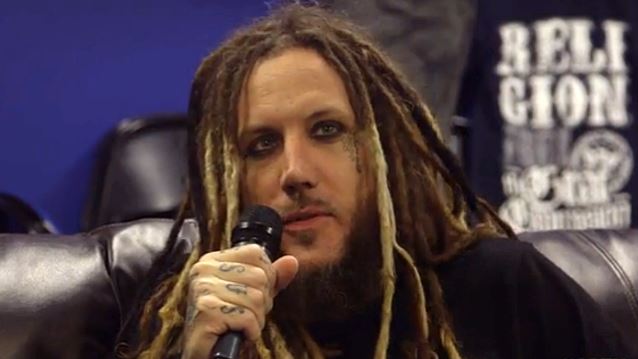 KORN guitarist Brian "Head" Welch has told APTV that the band's next album will probably arrive in the fall of 2016. He said: "We've gotta take time off, go away for a little bit. We never go away for long. I mean, I [left the band in 2005]… That's why. You know what? KORN never went away; they're always, always there. And so I was, like, I quit. [Laughs] This train has got to stop, man. I'm tired. But we're gonna take some time off and then come out swinging next year."

Regarding the musical direction of the next KORN album, Welch said: "Me and Munky [guitarist James Shaffer] stopped playing together for eight years when I was gone. We did the last record [2013's 'The Paradigm Shift'], and we just clicked, and it was awesome. But, to me, we've gotten used to each other again, and it's gonna be a more guitar-focused record. It's gonna be a little bit more technical — for KORN, anyway. So I just think it's… We're exactly where we wanna be as guitar-duo brothers."

Munky said in a recent interview with Billboard that KORN is about a third of the way through the writing process for its next CD. He said: "We went in, we wrote about 20 songs and about 10 of those we've kept and made better. So I think we're gonna need to go back in and write another batch of songs and then fine-tune those into maybe four, five really great songs. There's no rush, which feels great."

A producer has already been selected for KORN's 12th studio effort, but Shaffer said that the band "is gonna wait a couple more weeks before we announce that."

Welch said in a recent interview with "Do You Know Jack?" that the band's new music is "heavier than anyone's heard KORN in a long time… just the beginning stages are proof of that to me."

Welch added that touring with SLIPKNOT last year inspired KORN to get back to a heavier sound, saying, "I think it sparked and reminded everybody in the band what KORN started out to be."