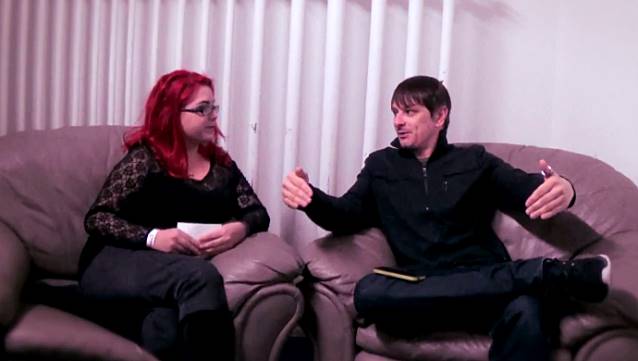 A brand new KORN song called "Hater", which arrived at rock radio on June 19, is taken from the upcoming expanded edition of the band's latest album, "The Paradigm Shift". KORN frontman Jonathan Davis told The Pulse Of Radio that the track is a direct rebuttal to the kind of person described in the title of the song. "Everybody has a hater," he said. "Everybody has someone that hates on you because you have something they want. And it's really, like, the first empowering song I've ever wrote where it's just blatantly telling you — I mean, the lyrics are: 'You can't bring me down/I've already had my life turned upside down/I ride a downward spiral round and round/But I keep flying, I keep fighting/You'll never bring me down.' That's like the most positive shit I've ever wrote. And it's so different. Everyone that's heard it loves it."

Davis wrote and recorded most of the song at a studio near his home in Bakersfield, California before sending it to the other members of the band to add their parts.

The new version of "The Paradigm Shift" is due out July 15 and features another new studio cut, called "The Game Is Over", as well as live tracks recorded all over the world.

Davis told Billboard.com, meanwhile, that he's also recorded a track with KORN called "So Unfair", which was inspired by his youngest son Zeppelin's battle with Type One diabetes. Davis called the song "the most personal to me."

The singer is also working on a new album from his electronic dance music side project KILLBOT.

KORN returns to the road this summer with the Rockstar Energy Drink Mayhem Festival, starting July 5 in Devore, California.