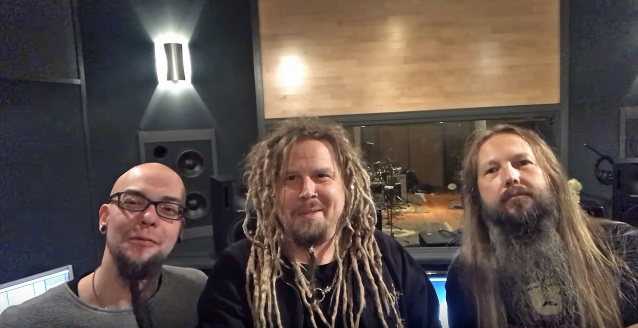 KORPIKLAANI: First Video From The Studio

Finnish folk metallers KORPIKLAANI are currently in the studio, working on the follow-up to 2015's "Noita" album. The effort is expected to arrive in early 2018 via Nuclear Blast.

The first video report from the studio can be seen below.

In February 2018, KORPIKLAANI will kick off an extensive European headline run with support from Russia's ARKONA, Dutch men HEIDEVOLK as well as Norwegian metallers TROLLFEST. The billing will be completed with EVERTALE, BLACK MESSIAH and THE PRIVATEER on select dates.

"Noita" was released in May 2015 in North America via Nuclear Blast. Recorded at Petrax Studio with Aksu Hanttu producing, recording and mixing again, it was KORPIKLAANI's first CD to feature new accordion player Sami Perttula, who played a very active role in the folk arrangements along with fiddler Tuomas Rounakari.