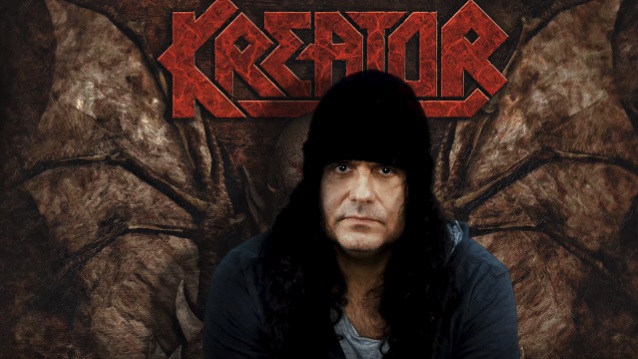 KREATOR Frontman: 'I Don't Wanna Wait Another Five Years For The Next Record'

KREATOR frontman Mille Petrozza was interviewed on a recent episode of the "TV War" show on Greece's Mad TV. You can now watch the chat below (starting at around 12-minute mark). A couple of exerpts follow (transcribed by BLABBERMOUTH.NET).

On why it took five years to release the follow-up to 2012's "Phantom Antichrist" album:

Mille: "Inspiration, timing… There's been a lot of touring for 'Phantom Antichrist'. And, of course, you don't wanna release an album when you don't have anything to say, if you're not inspired. And I know some bands that just… they have a plan where they go, like, 'Okay, we're gonna release an album now at this time, or this time.' I couldn't do this. I mean, I don't wanna wait another five years for the next record, but I can't force creativity. Inspiration comes when you work on music, of course. But I wanna stay relevant as a metal band. And I don't wanna be, 'Okay, this is our 14th album,' and this is, like, 'We love the old stuff, but the new stuff doesn't matter.' I'm not that kind of band. As soon as I think that we don't have anything more to say, we will split up the band. I think there's no need to release another KREATOR record if there's no great ideas."

On whether he still feels a need to take KREATOR in a more "experimental" musical direction, like he did in the 1990s:

Mille: "Experimenting, to me, nowadays means a different thing than, let's say, in the '90s. In the '90s, the technology that came up was inviting bands, or artists, to come up with new sounds, samples, new ways of integrating technology into the music. And we did that — on 'Endorama' we did that, we did that on 'Outcast' and 'Renewal'. But nowadays, this is not a challenge, because we know the technology, we know what's there and we know that you can, in theory, record the album in your living room, and you have the same great equipment as we would have in the '80s when we had to pay a lot of money to rent a studio. So that period is over — absolutely. I don't think it's exciting anymore to put a sample into a KREATOR song; what's the big deal? So we focus more on the melodies, we focus more on the music, we focus more on the energy. The essential element of KREATOR's music nowadays would be the combination of the four characters — the four characters that are creating something exciting and something fresh. I'm the main songwriter, I write the songs, but it's very important that all four members participate with their ideas when it comes to arrangements, little bits and pieces. So coming across as a band is the most important thing. The technology nowdays makes mediocre bands sound amazing, so we're trying to step back and keep the old-school vibe with the modern sounds. So, to us, it's all about authenticity and creativity and the true spirit of KREATOR, which has a legacy. We started in the '80s, so keeping the spirit alive in the year 2018, or 2017, when we released the last album, that's the challenge."

On what's next for KREATOR:

Mille: "We tour. This year is another touring year. I think we're gonna take next year off and write a new record. That's the plan at least. We'll see what happens. I don't put myself under pressure. Let's see how I feel after this tour, and if I have ideas for new music, I will book a studio and start working on demos as soon as I have the time. And then I'll come up with some new stuff."

KREATOR is currently on a co-headlining North American tour with SABATON. The 24-date trek kicked off February 8 at The Van Buren in Phoenix, Arizona and makes stops in Los Angeles, Montreal, and Philadelphia before concluding at Jannus Landing in Tampa, Florida on March 10.

KREATOR is continuing to tour in support of "Gods Of Violence", which entered the official chart in Germany at position No. 1. The cover artwork for the album was created by renowned artist Jan Meininghaus, who also made the limited-edition artwork for KREATOR's previous effort, 2012's "Phantom Antichrist", and has lent his talents to bands like BOLT THROWER, ACCEPT and OVERKILL in the past.