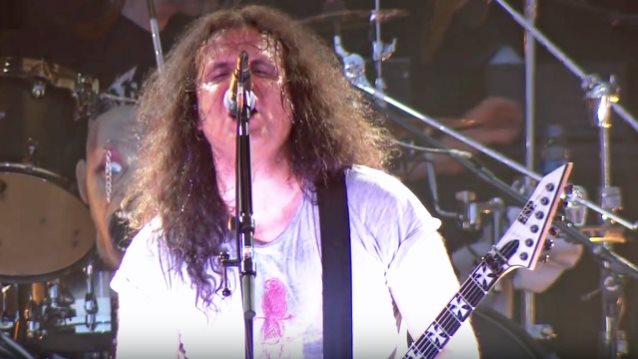 KREATOR Frontman On 'Gods Of Violence': 'We Needed To Come Up With An Album That Blows Everyone Away'

Metal Wani editor in chief Owais "Vitek" Nabi recently conducted an interview with guitarist/vocalist Mille Petrozza of German thrash metal veterans KREATOR. You can now listen to the chat below.

Speaking about the five-year gap between 2012's "Phantom Antichrist" album and the upcoming "Gods Of Violence", Mille said: "It didn't seem that long, to be honest, because we have been touring so much. And I think in order to come up with something relevant and something exciting, it's definitely important to take some time off, and hat's what we did. After the extensive touring cycle for 'Phantom Antichrist', we just took almost… not two years off — we played a couple of festivals — but, basically, we didn't do much in '15 and until now [in] '16; those two years were free of any long touring. And so, yeah, being able to do this was a luxury, but was also necessary in order to come up with something great."

Regarding KREATOR's decision to return to Fascination Street Studios in Örebro, Sweden to record "Gods Of Violence" with producer Jens Bogren (OPETH, AMON AMARTH, KATATONIA),Mille said: "It was fantastic. We had a great time. We knew the location, we knew the studio, and it was really cool. And it was summertime this time, so it was a lot easier, really. It was nice."

"Gods Of Violence" will be released on January 27, 2017 via Nuclear Blast Records. The cover artwork for the disc was created by renowned artist Jan Meininghaus, who also made the limited-edition artwork for KREATOR's last album, 2012's "Phantom Antichrist", and has lent his talents to bands like BOLT THROWER, ACCEPT and OVERKILL in the past.

The video for the "Gods Of Violence" title track can be seen below. The clip was filmed with renowned video production company Grupa13, which has previously worked with AMON AMARTH, BEHEMOTH and ELUVEITIE.

Mille commented: "We have prepared an amazing video trilogy with Grupa13 for our new album. We believe that they are among the most creative artists when it comes to surreal video art. The storyline is linked to our album concept and the first clip visualizes the birth of the KREATOR demon."

Regarding the "Gods Of Violence" title track, Petrozza said: "'Gods Of Violence' was the first song I wrote for this album and it stuck to me as the title track. It contains everything KREATOR is known for and it will blow your minds. Promise!" He added about the album artwork: "The cover of is a perfect reflection of my lyrical vision. I think this is Jan Meininghaus's best work so far."