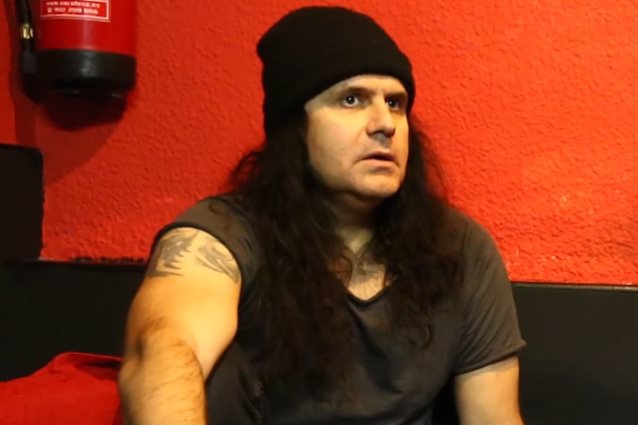 KREATOR Frontman: 'To Me, All Religion Can Be Good And Bad'

Metal Blast recently conducted an interview with guitarist/vocalist Mille Petrozza of German thrash metal veterans KREATOR. An excerpt from the chat follows below.

Metal Blast: [On KREATOR's new] album ["Gods Of Violence"], issues like religious intolerance and tyranny play an important role, as they have done in previous ones. For example, in "Satan Is Real", you reference "martyrs" who try to kill us. That rang a bell in regards to, for example, suicide terrorism.

Mille: "Yeah, absolutely. 'Satan Is Real' is a continuation of that. When I was growing up as a kid, I was imagining the world would be a better place in the year 2000, because for most of the people that I knew, religion didn't mean anything. It was something from the past, something that only their parents, or even their grandparents, would think was relevant. In the '80s and '90s, I pictured the future as a time when religion would lose its relevance, and yet now we're in the year 2017, and religion is stronger than ever. It's so strong that even though not many people follow religions, the ones that do can be very extreme. 'Satan Is Real' talks about that, about the blind leading the blind."

Metal Blast: When it comes to the role of religion now, are we talking about Islam? Because even though in places like the United States we do see the idiocy of fundamentalist Christians, who have definitely played a role in the wars in the Middle East, the kind of violence that you reference is tied to ISIS.

Mille: "That's what they claim. We don't know anything. I'm not an expert on these things, so I don't want to attack any particular religion. To me, all religion can be good and bad. If you follow religion for personal reasons and it gives you strength and it helps you in your life, then there's nothing bad about following a religion, or having faith; organized religion and simply having faith are two completely different things. Blaming one particular religion is just very easy."

Metal Blast: Well, you risk taking things out of the context in which they happen.

Mille: "Absolutely, because I think that Islam, in itself, if you read the Qu'ran, is a very peaceful religion. So is Christianity and, well, most religions. They are here to give you an orientation in your life and to help you start asking questions. I was raised a Catholic, and reading the Bible for the first time was almost like a fairytale book, where people could walk on water, etc. It gave me inspiration to question things. I got into symbolism and metaphors. I'd ask the priest how come this guy could walk on water, and he'd tell me they were metaphors about the power of faith. I think faith is very positive, and having all these symbols and ancient wisdom could be great, but we have to move on. We have to go further. We have to take it as something from the past and evolve, go further, and leave them behind. Criticizing religion got old, like, twenty years ago already."