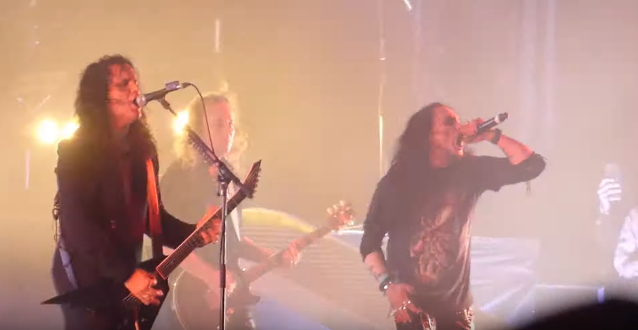 German thrash metal veterans KREATOR were joined by CRADLE OF FILTH's Dani Filth for a performance of the song "Betrayer" during their August 14 appearance at the Bloodstock Open Air festival at Catton Park, Walton-on-Trent, United Kingdom. Fan-filmed video footage of Dani's performance can be seen below.

Earlier this year, KREATOR frontman Mille Petrozza revealed to the official podcast of Italy's Metalitalia.com that KREATOR would wait until the coronavirus pandemic has subsided before releasing an album.

"Last [year], in August, we felt that we were done [writing], and we were very enthusiastic about, like, 'Okay, this is almost an album. We have 12 songs. And we take the 10 best, or whatever we come up with.' And we already planned on going into the studio in February," he said. "Now it's February, and the world is still kind of fucked with the COVID. So we have to wait and be patient… I think going on a tour, the artwork, everything has to connect. So we'll wait until that's possible again, and then we'll put out the album."

Asked if KREATOR will once again work with producer Jens Bogren, who helmed "Gods Of Violence" and 2012's "Phantom Antichrist", Mille said: "At this point, it looks like we're working with Arthur Rizk [CAVALERA CONSPIRACY, CODE ORANGE, POWER TRIP]. That's what we have planned at this point. And I'm kind of exchanging demo tapes and discussing recording techniques [with him]. So, yeah, it looks like we're working with Arthur."

Last September, KREATOR guitarist Sami Yli-Sirniö described the sessions for the band's new album to Italy's Poisoned Rock as "a lot of fun," adding that the "mood" in the band "is great. And the general vibe and the atmosphere is very good," he said. "[These are] creative times for KREATOR at the moment."

In March 2020, KREATOR surprise-released a new single, "666 - World Divided". The song was produced by Andy Sneap and Markus Ganter and was recorded at Hansa Tonstudios in Berlin, Germany.

KREATOR's previously announced "State Of Unrest" European tour with LAMB OF GOD has been rescheduled for November/December 2021 in the wake of the coronavirus (COVID-19) pandemic.