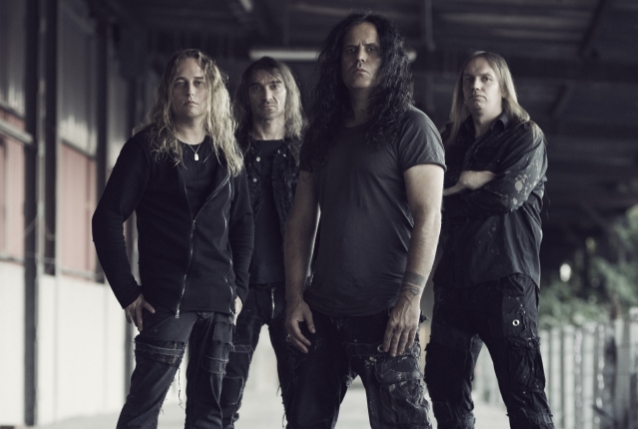 KREATOR's December 16 concert at the Roundhouse in London, England will be professionally filmed. According to the band, there is "something very special in the works" for the footage, which will presumably be released at a later date.

The London show will close out the German thrash metal group's European co-headlining tour with DIMMU BORGIR. Also appearing on the bill are HATEBREED and BLOODBATH.

KREATOR will take 2019 off from touring to focus on writing the material for the follow-up to 2017's "Gods Of Violence" album.

"Gods Of Violence" entered the official chart in Germany at position No. 1. The cover artwork for the album was created by renowned artist Jan Meininghaus, who also made the limited-edition artwork for "Phantom Antichrist" and has lent his talents to bands like BOLT THROWER, ACCEPT and OVERKILL in the past.

In a recent interview with Finland's Rauta, KREATOR frontman Mille Petrozza was asked how he maintains his energy level considering he's not 25 anymore. He responded: "I guess the music keeps you young and fresh. And being disciplined about poisoning your body anymore; I don't do that anymore — I used to, when I was really young. Nowadays it's all yoga and health food and veganism. I wanna keep doing this until I'm very old. I guess that's the key — just try to focus; focus on what's important. And to me, the older I get, the more clear it becomes that the reason why I started this was the music and not abusing your body, not doing anything that's unhealthy and not overdoing the partying and just focus on the music. And that, to me, was what always was the most fun anyway. So I'm totally happy."

London Hordes! We are excited to announce ‘London Apocalypticon’ – filmed live from the Roundhouse, 16th December....

Posted by Kreator on Thursday, December 6, 2018