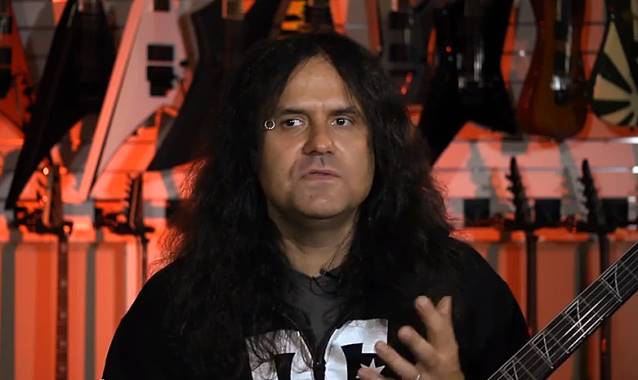 KREATOR's MILLE PETROZZA: No New Studio Album Until 2015 At The Earliest

David E. Gehlke of DeadRhetoric.com recently conducted an interview with guitarist/vocalist Miland "Mille" Petrozza of German thrash metal veterans KREATOR. A couple of excerpts from the chat follow below.

DeadRhetoric.com: What about the "Endorama" days when admittedly, you weren't having the best of personal times?

Petrozza: It wasn't an identity crisis. Maybe I've asked my question a little too much: "What am I going to do?" I wasn't really that old. I was like, "Maybe I want to do something different with my life." Then I tried to go deeper into music and explore different styles.

DeadRhetoric.com: And that's your most experimental album.

Petrozza: Right. I like the album. I think it was necessary. At the time, it's just what we felt like; it's what we wanted to do. It's not like we forced [it]. No record company told us to write a goth album. When we signed to BMG in Europe they told us write another thrash album, but it wasn't in us at the time.

DeadRhetoric.com: The '90s weren't a good time to be in a thrash band.

Petrozza: Many bands fell into an identity crisis at the time. Remember the "Skunkworks" album that Bruce Dickinson did? That's even worse! [laughs]

DeadRhetoric.com: That's not a bad record, but I know what you're saying. You had such great success in the late 80′s and early '90s, but what do you do after that?

Petrozza: Some people said it was the grunge phase that killed it all, but I don't think it was only that. I think some metal bands were mistaken for the glam stuff. Like the real metal bands were labeled with the idiots that were around at the end of the '80s that made metal look bad. In my opinion, that's what they did. A lot of the glam stupidity took people off of metal. I think it has to do with the MTV era. Most of it here in America was the POISON, RATT, WHITESNAKE, then you had your one spot of SLAYER, EXODUS, and KREATOR. It was mostly that and people would think "This is metal." They want their glam stuff. I didn't listen to it, and I didn't want to have anything to do with it.

DeadRhetoric.com: When you got through the '90s and into "Violent Revolution", did it feel like it was time to do another thrash album? And as you know, people were skeptical of you doing something like that again.

Petrozza: I didn't really pay attention. I think the main influence — it sounds strange — we were on tour with WITCHERY in Europe. [THE HAUNTED guitarist] Jensen would play us the version without vocals of "The Haunted Made Do It", and that was all we listened to on the tour bus. We were like, "This is amazing. I can't wait for it to come out with the vocals." That was the inspiration because we were like, "Wait until you hear our new album!" [laughs]

DeadRhetoric.com: That's funny because those Swedish bands like THE HAUNTED, DARK TRANQUILLITY, and IN FLAMES will all say they're influenced by KREATOR, but here they are, influencing you.

Petrozza: Right! I sometimes don't like when people say that. When I read reviews online or in magazines, they say "They use those Swedish death metal riffs." I'm like "No! We were doing that before." Those people didn't do their homework. If you ask the guys from IN FLAMES, they'll tell you the same thing. I sometimes get a little…not frustrated, but I could punch the guy in the face. [laughs] Whatever. It just makes those guys look stupid that they didn't do their homework. If you call yourself a journalist, you should dig a little deeper.

DeadRhetoric.com: Is this going to be another two- or three-year-long touring cycle? No new album until 2015 or 2016?

Petrozza: Yeah. I do see it going that way. I need inspiration. I know some bands who I really respect, but they put an album out every year. A.) I'm not that productive; and B.) If I were to put an album out every year, I would have like, two good songs on every album. Nope. That's not the way it works. Music, as an individual and as a musician, you need time off to be inspired again. You need to go out there and live your life. Don't get me wrong — I love being on the road and being in the band and playing for the people, but I'm in a bubble — this isn't reality. This is different. When we get home and have a year and a half off, or even three months, that's when I start picking up my guitar again. This is when I get inspired. I read some books, and watch some movies.