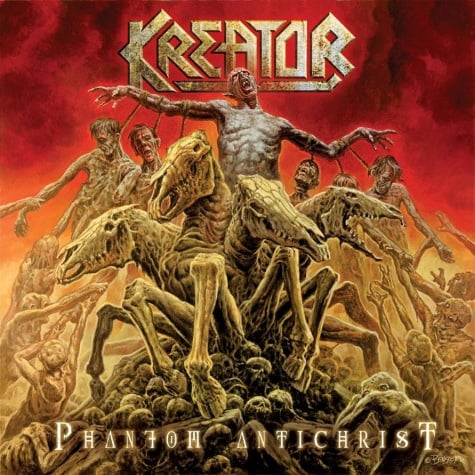 "Phantom Antichrist", the new album from German thrash metal veterans KREATOR, sold 3,900 copies in the United States in its first week of release to debut at position No. 130 on The Billboard 200 chart. The CD landed at No. 1 on the Top New Artist Albums (Heatseekers) chart, which lists the best-selling albums by new and developing artists, defined as those who have never appeared in the Top 100 of The Billboard 200.

In Canada, "Phantom Antichrist" came in at No. 128 on the Top 200 Albums chart and at #15 on the Top Hard Music Albums chart. In the band's native Germany, the CD debuted on the German Media Control chart at No. 5.

KREATOR's previous album, "Hordes Of Chaos", sold around 2,800 copies in the United States in its first week of release to debut at position No. 165 on The Billboard 200 chart. The CD landed at No. 7 on the Heatseekers chart.

The limited edition of "Phantom Antichrist" was made available as two-disc digipack, including a bonus DVD.

* Conquerers Of The Ice – The Making Of Phanom Antichrist
* Harvesting The Grapes Of Horror
* Live at Wacken Open Air in 2011 and 2008 (mixed by Klaus Scheuermann, edited by Marcel Schleif and Stephan Lier)

The "Phantom Antichrist" video can be seen below. The clip was helmed by Poland's Grupa 13, which has previously worked with BEHEMOTH, ELUVEITIE, SONATA ARCTICA and DECAPITATED, among others.