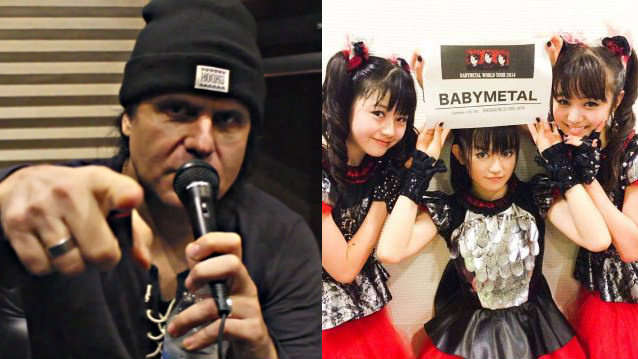 The Age Of Metal recently conducted an interview with guitarist/vocalist Mille Petrozza of German thrash metal veterans KREATOR. You can now watch the chat below.

Asked to weigh in on the Japanese pop-metal group BABYMETAL, which has been described by some as the most polarizing thing to hit heavy metal in the past decade, Mille said: "I'm not the one to judge, man. It's not for me; I'm not their target [audience]."

He continued: "My [personal] opinion? If I listen to metal, I'll listen to the 'real' metal. I like some of the gimmick metal stuff. But on the other hand, I think if I really wanna listen to music, it's gotta be serious music. I don't like 'fun' music so much.

"I checked out this BABYMETAL, who seems to be the enemy for some people. Like, 'Oh, how can you do this?' I'm, like, 'It's a big party. Everybody's going wild.' Maybe I could not enjoy it as much as the people that were there, but if people are enjoying it, why not? It's not harmful to any of us, to the 'real' metal bands. It won't hurt us. BABYMETAL will not hurt KREATOR and all the bands that are around that play 'real' metal. So don't worry; it's all fine. [Laughs]"

Mille also spoke in more general terms about bands like BABYMETAL who combine pop and edgy heavy metal, saying: "I'm a big fan of pop music, so if I wanna listen to pop, I listen to pop music, and not 'pop metal.' That doesn't make too much sense. Even though some people say that if you listen to 'British Steel' by JUDAS PRIEST, that's also pop metal, but I guess that's in a cooler way, you know. I think there's a couple of bands that are just… Like I said, it's all fine, but it's just not my cup of tea, I'd say."

Petrozza is not the first metal musician to come to BABYMETAL's defense. Earlier in the year, bassist Shane Embury of British grindcore pioneers NAPALM DEATH wrote in a special article for UK's Metal Hammer magazine: "I know young kids who already listen to grindcore. There are people who turn up to our shows with kids that are eight or nine years old, and BABYMETAL is obviously way more accessible than what we do. I don't think that's a bad thing — I've got a baby girl who is eight months old, and if she starts bopping around to BABYMETAL or their equivalent, I'd be cool with that."

He continued: "If you look at SLIPKNOT, they took the heavy guitar to a massive audience. You can look at a SLIPKNOT fan and a NAPALM DEATH fan and sometimes there's a crossover and sometimes there's not at all, but either way, those people are getting used to the heavy guitar and drums and it makes it easier for them to explore other bands later on. In the same way, BABYMETAL will more than likely cross over to young kids and get them used to that heavy sound.

"Some people are also offended simply by BABYMETAL being labelled as metal. Why? Why would you get offended? It's a big genre, metal. There's all kinds of bands crossing over. Bands like EVANESCENCE or the whole folk metal thing. Some people could find it ridiculous, but I wouldn't be that negative. I might not like it, but I find it interesting that heavy guitars are used in different ways. For me, BABYMETAL is an extension of that."

Embury's fellow British extreme metal pioneer Jeff Walker of CARCASS expressed a similarly welcoming stance when the subject of BABYMETAL came up at this past July's Sonisphere festival. He said:"I'm starting to warm to the idea of what [BABYMETAL is] doing. It's actually fun, you know — like GHOST, to be honest. Some people get very reactionary about a band like GHOST or BABYMETAL. It puts a smile on people's faces. That's what music's about, isn't it?! Enjoying it and not being so serious." CARCASS guitarist Bill Steer added: "I mean, obviously, we don't cover this ourselves, but the fun, entertainment angle [in music], it is important."