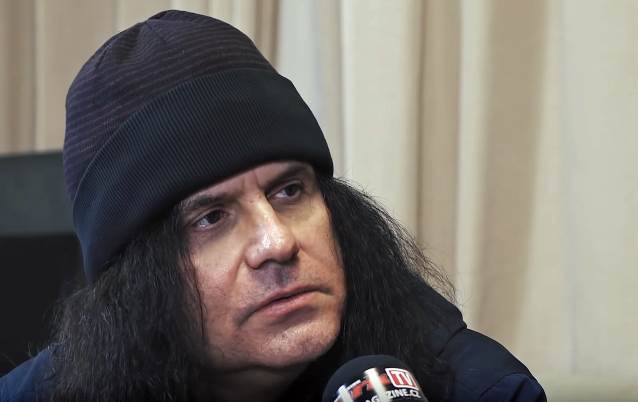 In a recent interview with Czech Republic's Spark TV, KREATOR frontman Mille Petrozza was asked if he supports People for the Ethical Treatment of Animals (PETA),the international organization that protects the rights of animals from people. "I have a friend that works for PETA2 [the youth division of PETA], and I work with them; I do some stuff for them," Mille responded (see video below). "They're very radical — some of their stuff is very graphic — but I think there is a necessity to show the graphic details in order to give people a wake-up call."

He continued: "I sometimes, on my Facebook timeline, block PETA1 [referring to the main PETA organization] because sometimes they show very horrible things. I know about these horrible things, so I just block it. But I support the idea of making sure that people become aware of the cruelty that is being done to animals. So I know it's radical, I know it's very graphic and I know it's horror, and there's a lot of people that criticize PETA for that. I think it's definitely necessary that people become aware."

Asked by Noisey if people are ever surprised that KREATOR's lead singer is vegan, Mille said: "Not in this day and age, man. There's so many vegans nowadays, it's become kinda trendy. People are interested more than anything. Even people who aren't vegan love vegan food! Of course the whole world will never become vegan, even though it'd be better for the planet, but it's an interesting genre of food, so to speak."

KREATOR's latest album, "Gods Of Violence", was released in January 2017 via Nuclear Blast.