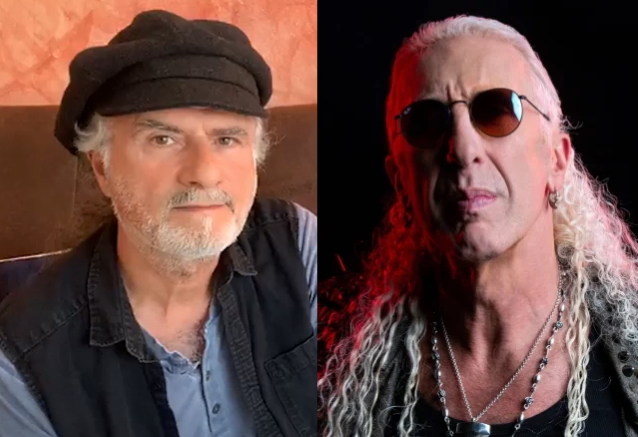 KROKUS's MARC STORACE Wants To 'Bury The Hatchet' With DEE SNIDER: 'It's Not Worth Going To The Grave Carrying A Burden Like That'

KROKUS vocalist Marc Storace has once again said that he is ready to put his band's long-running feud with TWISTED SISTER's Dee Snider behind him.

In his autobiography, "Shut Up And Give Me The Mic", Snider had nothing nice to say about KROKUS. For an entire chapter, he raged about the band, calling them "Krapus" and stating, "You have no idea how close you came landing on the bottom of a lake."

The reason for his outburst: KROKUS commissioned Snider's wife Suzette in 1982 to sew stage outfits for the band's U.S. tour, but the former KROKUS tour manager refused to pay her for her services.

"These guys ripped off my wife and threatened her," said Snider, who pointed out that his wife's mother emigrated from Switzerland.

"I was proud of this rock band from the home country of my mother," said Suzette. But the pride has turned into rage.

In a brand new interview with Canada's The Metal Voice, Storace was asked if he and his KROKUS bandmates have "made peace" with Snider. He responded (as transcribed by BLABBERMOUTH.NET): "I've always made my peace. In fact, I was on this tour [seven years ago], 'Rock Meets Classic', with other [well-known musicians like] Ian Gillan and John Wetton, these big guys, and at the end of that tour, we were supposed to play one concert in Wacken [Germany at the Wacken Open Air festival] with this whole orchestra, the band and everything. And I was thrown off because Dee Snider came in to headline, and he said, 'I won't do it if Storace is not thrown off.' And I felt, 'What a motherfucker.' Actually, I was looking forward to asking Dee if we could go to the side and have a beer so I could maybe apologize and say, 'Hey, let's bury the hatchet. It's not worth it. It's a few hundred dollars' worth of clothes, which your wife [made], whatever, we didn't accept. We didn't like those clothes — sorry — stage clothes.' And it's as simple as that. I don't know what had happened — I was not in the room when this thing happened — so I don't know if there were any dirty words spoken or attitude in which things were said. But I don't think it's worth going to the grave carrying a burden like that."

Asked what he would say to Dee if he had a chance to speak to him directly, Marc said: "Hey, Dee. I'm looking forward to meet you, not to get into big arguments. We know the whole story, but I think now we're mature. We look forward. You love your wife; I love mine. And let's just sit down and… I don't know. Move on. In life, you wanna move on, leave all these negative burdens behind."

Storace previously discussed the Snider beef during a 2013 interview with "The Metal Voice". At the time, he called Dee's comments "so childish. We gave [his wife] a chance," he said. "I mean, how do you do?! Before you buy a truckload of wine, you wanna taste a bottle. So we just wanted to have samples… to see some clothes. And our tour manager, he sent off the sizes and… I can't even remember the details; it's ridiculous. In the end, she came with the stuff, we tried it on, and it looked horrible. I'm sorry. I mean, I'm sorry. And they got so offended, and it was such a great insult to them. And they wanted their money. And [our tour manager] said, 'Hey, we're not buying. Keep the clothes. Sorry. No deal.'"

KROKUS bassist/producer Chris Von Rohr also weighed in on the incident, recalling a decade ago: "The clothes did not match at all our expectations. Too much harlequin style. So we made a bonfire of it."

Many years have passed and the members of KROKUS are older and wiser. "If we have not treated his wife with due respect, we are sorry," Von Rohr said.

In 2013, Von Rohr proposed to Dee and his wife to bury the hatchet and drink a beer or two together at a festival where both bands were supposed to perform in reconciliation of an event that happened four decades ago.

Swiss newspaper Blick reached Snider by phone and submitted KROKUS's peace offer. "If they are serious, I think it's a nice gesture," Snider was quoted as saying at the time. "But I have to ask my wife first if she is ready to forgive KROKUS."

Four years ago, Snider stated about his request to remove Storace from the billing of the "Rock Meets Classic" at the 2015 Wacken Open Air: "'Rock Meets Classic' is an amazing thing. I don't know who is on the bill, but the day before I'm ready to head there, I find out that the singer of Krapus is on the bill. No, no, no, no, no. I call my people and tell them, 'Kick him off the bill or I'm not playing, I don't care. They don't have to kick him off. I won't play. I'll go home because I have no problem with not playing.' The most dangerous person in the room is the person with nothing to lose. I don't have to do a show. I do a show because I want to. Needless to say, the singer of Krapus was kicked off the bill and nobody cared."

Recorded interview WITH @Suzette_Snider yesterday! Watch for it coming soon! Bonus questions for subscribers only about how @HowardStern and the band Krapus both nearly had hits executed on them! SUBSCRIBE TO I WANNA TALK THROUGH @gasdigitalhttps://t.co/JLQiN4yihQ