Charles R. Cross, the Seattle-based author who penned several books on Kurt Cobain, including the biography "Heavier Than Heaven", has confirmed that a note found in Cobain's wallet at the NIRVANA frontman's death scene was in fact penned by Kurt's then-wife, Courtney Love. Cross wrote in a blog post on The Seattle Times' web site that Love told him she penned the note on New Year's Eve 1991, the night NIRVANA appeared in San Francisco with the RED HOT CHILI PEPPERS and PEARL JAM.

The text of the note, written on stationery from the Phoenix Hotel outside of San Francisco, reads: "Do you, Kurt Cobain, take Courtney Michelle Love to be your lawful shredded wife even when she’s a bitch with zits and syphoning all your money for doping and whoring. Will you promise to fuck her at least once a week, o.k."

According to The Seattle Times, Love's authorship is supported by two sources who examined the handwriting, including Love's sister, Nicole Jon Carroll, and a former employee of the Kurt Cobain estate who has closely examined Cobain's and Love's journals.

A partial photo of the note released by Seattle police initially made it seem as though Cobain was mocking his wedding vows with Love.

Cross stated that Cobain and Love often wrote each other sarcastic notes such as the one found in Kurt's wallet at the time of his death.

Cross told The Pulse Of Radio that even though Kurt and Courtney were both drug addicts at the time and not necessarily helping each other, he thinks that Cobain's widow has gotten unfairly blamed for enabling him. "You know, Kurt's addiction was actually worse than Courtney's, so when we look at that marriage, I think sometimes we unfairly blame Courtney because she survived Kurt and think that she played, you know, a larger role in his death," he said. "Ultimately he made the choice to do that. Courtney has also been, frankly, her own worst enemy. Some of her own struggles and some of the things she's said throughout the years haven't helped people have more sympathy for her."

The note is the latest piece of evidence released from the scene of Cobain's suicide, which took place more than 20 years ago.

The police re-examined the case last month in advance of media interest surrounding the 20th anniversary of Cobain's death and came across four rolls of undeveloped film taken at his Seattle home on April 8, 1994, the day his body was found after he shot himself three days earlier.

The photos revealed no new evidence and police have ruled definitively that Cobain's death was a suicide, despite some conspiracy theorists believing that Love and/or others may have had him murdered.

NIRVANA was inducted into the Rock And Roll Hall Of Fame last month, with the band's surviving members joined onstage by singers such as Joan Jett and Lorde to perform a handful of songs. 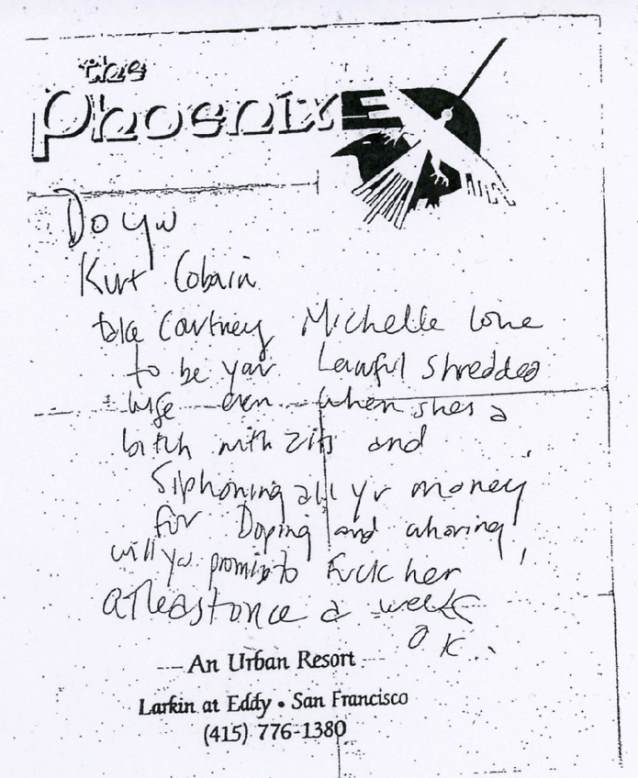