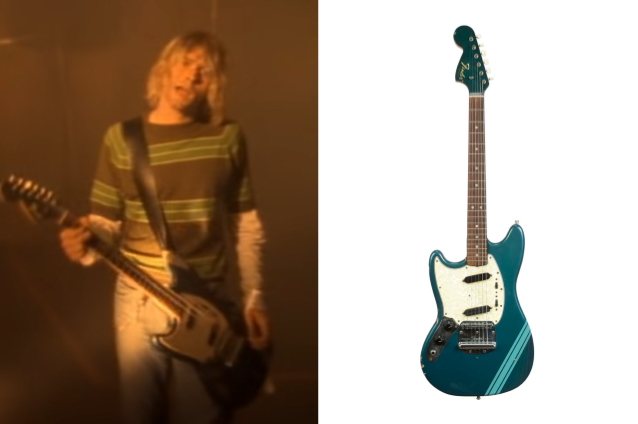 One of the most important and iconic guitars owned and played by Kurt Cobain ever to come to auction sold for $4.5 million, far surpassing its original estimate of $600,000. The guitar was acquired by The Jim Irsay Collection in Indianapolis in a bidding war among collectors and bidders all across the globe who participated live at the Hard Rock Cafe New York, online at juliensauctions.com and on the phone. In honor of Mental Health Awareness Month, the Cobain family is donating a portion of the proceeds of the legendary guitar and select Kurt Cobain items to Kicking The Stigma, the Irsays' initiative to raise awareness about mental health disorders and remove the stigma associated with these illnesses. Through grants, as well as personal donations by the Irsay family, more than $16 million has been committed to local and national organizations to expand treatment and research and raise awareness in Indiana and beyond.

"I am thrilled to preserve and protect another piece of American culture that changed the way we looked at world," said Jim Irsay, owner and CEO of the NFL's Indianapolis Colts. "The fact that a portion of the proceeds will go toward our effort to kick the stigma surrounding mental health makes this acquisition even more special to me."

"To have this legendary guitar, one of the most culturally significant and historically important guitars of Kurt Cobain and in all of rock music history return to my home state of Indiana to be part of Jim Irsay's renowned memorabilia collection is a great honor and personal highlight of my life," said Darren Julien, president/chief executive officer of Julien's Auctions who is from Auburn, Indiana. "This once-in-a-lifetime auction has been one of the greatest privileges in my professional career and I'm duly pleased that the proceeds will also bring much needed attention to mental health awareness."

NIRVANA's breakout hit single "Smells Like Teen Spirit" created a seismic shift in the music universe and a cultural moment in history by heralding the alternative/grunge era of the '90s and becoming one of the most iconic songs and music videos of all time. The Generation X anthem off their sophomore album "Nevermind" that celebrated its 30th anniversary milestone this past fall, turned the underground Seattle based trio of Kurt Cobain, Krist Novoselic and Dave Grohl overnight into the biggest band in the world. The song delivered a call to arms for teenage rebellion that was punctuated by the intensity of Cobain's unforgettable performance in the legendary video and its powerful imagery of anarchy and alienation that would later define the grunge revolution. The video depicting a high school pep rally that turns into a mosh pit frenzy quietly debuted September 29, 1991 on MTV's "120 Minutes" and stratospherically propelled the band into superstardom with "Nevermind" turning gold only five weeks after its release.

Cobain considered this 1969 Fender Mustang, left-handed guitar in Competition Lake Placid blue finish with matching headstock one of his favorite go-to guitars and said in his final interview with Guitar World: "I'm left-handed, and it's not very easy to find reasonably priced, high-quality left-handed guitars. But out of all the guitars in the whole world, the Fender Mustang is my favorite. I've only owned two of them." The guitar was also used in the recording studio during both the "Nevermind" and "In Utero" recording sessions, as well as numerous prominent live performances. It was prominently displayed at Seattle's Experience Music Project, now named MoPOP Museum of Pop Culture, and photographed and selected for the prestigious The Guitar Collection.

Other rare and sensational items personally owned and used by the famed musician that sold today included (with estimates): Cobain's 1965 "Baby Blue" Dodge Dart 170 4-door sedan — the only known surviving car that was owned and driven by Kurt Cobain ($375,000). The sale of the light blue Dodge was accompanied with an exclusive NFT from the Collection of Kurt's sister Kim Cobain who has owned the car for the last 28 years; Cobain's personally drawn 1985 IRON MAIDEN "Killers" skateboard deck artwork featuring the IRON MAIDEN mascot "Eddie" plus NFT accompanying the physical item ($35,200); Cobain's original artwork of Michael Jackson plus NFT accompanying the physical item ($87,500) and more.

A collection of exclusive NFTs of Kurt Cobain iconography were also highlights including: an NFT of Kurt Cobain's iconic personally owned and worn green Fetalini striped short-sleeve sweater that was featured in NIRVANA's "Smells Like Teen Spirit" music video with Kim Cobain's exclusive audio narration ($10,240) and a 360-degree digital representation with Kim Cobain's exclusive audio narration about a pair of black canvas Converse Jack Purcell shoes that were owned and worn by Kurt Cobain ($10,240) with the left shoe that reads "Fuhgawz" and the right shoe "Foogauzie."

Over 1,300 items were sold at Julien's Auctions' "Music Icons" event this weekend at Hard Rock Cafe New York which brought in a total of nearly $15,000,000. The auction kicked off on Friday with Property From The Archives Of Alex Lifeson, the record-breaking auction house to the stars' tribute to one of the most influential music icons and guitar heroes of the progressive rock metal genre. More than 100 lots featuring signature guitars, instruments, wardrobe, gear and memorabilia owned and used by Alex Lifeson, the legendary Rock And Roll Hall Of Fame guitarist and co-founder of RUSH, one of the best-selling progressive rock groups of all time, were offered to the public for the first time and shattered all original estimates. Highlights included (with winning bids): Lifeson's most iconic and main guitar, "Whitey", a Gibson ES-355TD electric guitar custom-built for Alex Lifeson at the Gibson factory in Kalamazoo and Lifeson's main guitar from 1976-2015, his entire time with RUSH, which sold for an astounding $384,000. This splendid guitar was part of RUSH's most explosive era of creativity and legendary music: "A Farewell To Kings" (1977) to "Test For Echo" (1996),and can be seen being played by Lifeson on stage during all tours from "A Farewell To Kings" (1977-1978) to "R40" (2015) as well in most of RUSH's music videos accompanying "A Farewell To Kings", "Hemispheres" and "Moving Pictures", as well as "Show Don't Tell" from "Presto" (1989); his 1970 Gibson Les Paul electric guitar acquired by Lifeson on RUSH's inaugural tour in 1974, and played extensively by Lifeson on all RUSH albums and tours from "Fly By Night" and "2112" to "Hemispheres" ($224,000); a 1981 Gibson Howard Roberts Fusion electric guitar that served as Alex Lifeson's main guitar on the 1981 "Moving Pictures" tour as well as on numerous tours through the 2007 "Snakes And Arrows" tour ($218,750); his modified white Fender Stratocaster electric guitar known as the "Hentor Sportscaster" that was used by Lifeson to record most albums since "Moving Pictures" (1981),in particular "Grace Under Pressure" (1984) and considered Lifeson's favorite guitar for soloing, including the solo from RUSH's Billboard hit "Limelight" ($187,500); his 1976 Gibson Dove acoustic guitar used by Lifeson to write "Closer To The Heart" and other songs from the 1977 RUSH album "A Farewell To Kings" and played on numerous tours including "A Farewell To Kings" (1977-1978),"Hemispheres" (1978-1979),and "Moving Pictures" (1981) ($128,000); a black 1991 Paul Reed Smith CE 24 electric guitar that served as Lifeson's main guitar from 1991-2004 ($112,500); a 1976 Ovation Classical guitar used by Lifeson on tour from 1994-2015 ($102,400); a 1957 Gibson Les Paul Gold Top electric guitar played by Alex Lifeson during a performance with BIG SUGAR in 2017 ($128,000); a 2015 limited run Gibson EDS-1275 double-neck electric guitar created especially for RUSH's 40th-anniversary "R40" tour and played live by Lifeson on songs requiring both a six-string and twelve-string guitar, including "Xanadu" from the 1977 album "A Farewell To Kings" which sold for $89,600 and many more.