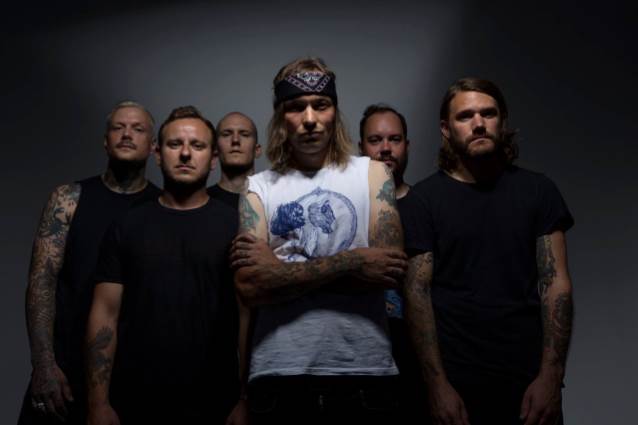 Norwegian rockers KVELERTAK have announced the addition of singer Ivar Nikolaisen to the group's ranks. He joins the band as the replacement for longtime frontman Erlend Hjelvik, who announced his departure from KVELERTAK earlier in the week.

KVELERTAK said in a statement: "We are immensely excited to have Ivar on board, and what he will bring to the band.

"KVELERTAK has had a history with Ivar since the bands early days. Both as a tour companion with his other bands (SILVER, THE GOOD, THE BAD AND THE ZUGLY),and as the guest vocalist on 'Blodtørst'. Ivar is the frontman we could hope for, and nothing is more natural for us than for him to take over the throne."

Ivar added: "I've been a huge fan of KVELERTAK ever since I first saw them nearly ten years ago. It's an honor to be a part of the band! I will not try to copy Erlend. Erlend is a lion. I'm just a small rat. But this rat is pissed off, infectious, and full of pestilence — ready to take this machine to new heights!"

Nikolaisen made his live debut with KVELERTAK last night (Friday, July 20) at the Fjellparkfestivalen in Flekkefjord, Norway. Video footage of the concert can be seen below.

KVELERTAK is currently working on material for its fourth album, tentatively due in 2019.

In announcing his exit from KVELERTAK, Hjelvik said that "the experience of building a successful band has been fun and rewarding but has also been equally intense and challenging. Over the years, this has taken its toll. As we've been developing personally and professionally, our individual goals, needs and motivations have changed, leading us in different directions."

"Though it is a heavy decision to leave a life I've been living and breathing for the last decade, I feel happy and excited to explore new possibilities for the future.

"Regrettably, due to circumstances out of my control, I am not able to perform the last four shows in Norway this summer. I apologize to the festival organizers and fans planning on these shows."

KVELERTAK's third album, "Nattesferd", arrived in May 2016. The follow-up to 2013's "Meir" was recorded live at Amper Tone Studio in Oslo, Norway (KVELERTAK's first effort to be recorded in the group's homeland) and was produced by the band and mixed/engineered by Nick Terry (LINDSTRØM, TURBONEGRO, THE LIBERTINES).