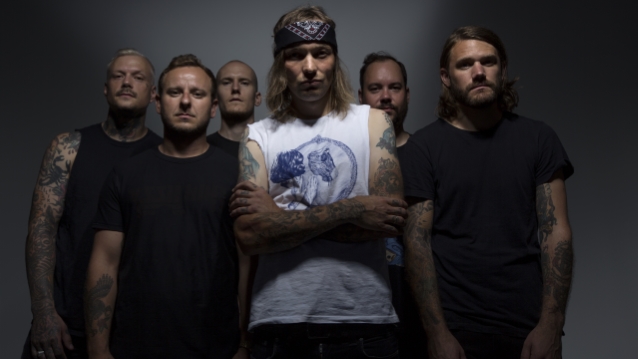 Norwegian rockers KVELERTAK have written "a lot of stuff" for their fourth album, tentatively due before the end of the year. The follow-up to 2016's "Nattesferd" will mark the band's first release since the departure of longtime frontman Erlend Hjelvik and addition of Ivar Nikolaisen.

KVELERTAK guitarist Vidar Landa told Ireland's Overdrive that the singer switch "was seamless in a way. We knew that Erlend wanted to quit and do other stuff," he said. "We were lucky that we had that close connection with Ivar. He's been part of KVELERTAK for a long time and has sung on a few tracks for us in the past, doing backing vocals. We've toured together in the past also so he was really the only one that we were thinking of to replace him when Erlend was first talking about leaving. Luckily, Ivar wanted to do it and it's all just fit really well, thankfully. It would have been much harder to go through the audition process and undergo that process of looking for a new vocalist. We were very lucky for the way it all happened."

KVELERTAK played eight concerts with Nikolaisen to start with, and "and it just gradually felt more comfortable," said bassist Marvin Nygaard. "We honestly thought those shows went better than we expected and are so happy with the transition. We're like a team when we hit the stage and that's the real feeling that we were worried about losing with the change, but as we said, we're very lucky with the way things have worked out.

Asked about the musical direction of KVELERTAK's next disc, Vidar said: "Right now, it's kind of hard to explain the new material, but we are working on the new album and have written a lot of stuff so far. The way it looks now, I guess we are working with things that we felt worked really well for us on 'Nattesferd' and stuff that really clicked with us on the first two albums. For us, 'Nattesferd' is not really that different to what KVELERTAK is about, and I'm sure the next album is going to solidify our sound if anything else."

According to Marvin, guitarist Bjarte Lund Rolland has come up with most of the initial ideas for KVELERTAK's upcoming album. "But we'll be entering into the rehearsal studio soon so we can all start working on the ideas," he said. "But, yeah, it's usually Bjarte that brings a lot of the new foundations to the tracks."

Nikolaisen made his live debut with KVELERTAK in July 2018 at the Fjellparkfestivalen in Flekkefjord, Norway.

"Nattesferd" arrived in May 2016. The follow-up to 2013's "Meir" was recorded live at Amper Tone Studio in Oslo, Norway and was produced by the band and mixed/engineered by Nick Terry (LINDSTRØM, TURBONEGRO, THE LIBERTINES).