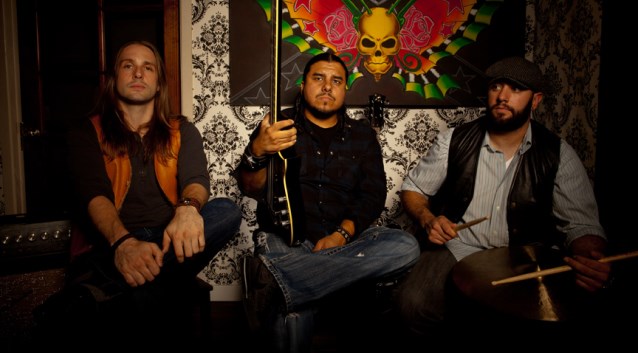 Razor & Tie has announced the addition of the Southern California rock trio KYNG to its worldwide label and publishing rosters. The band is currently well into the writing and recording of its forthcoming studio album, with a single expected later this year.

KYNG will hit the road in late August with SEVENDUST, 10 YEARS, MONSTER TRUCK and AMERICAN FANGS and will join the Hellpop Tour with IN THIS MOMENT, MOTIONLESS IN WHITE and ALL HAIL THE YETI beginning October 24.

KYNG comments: "We are very excited to announce that we have signed a record deal with the illustrious Razor & Tie. We are over the moon about being on such a great label and being a part of an incredible roster of bands, including our brothers THE SWORD! We will have new music out for you soon. The world will know..."

Formed in 2008 in Southern California, KYNG's sound features a unique and universally appealing combination of heavy and captivating concepts, channeling influences from BLACK SABBATH, LED ZEPPELIN to the FOO FIGHTERS and QUEENS OF THE STONE AGE. KYNG's versatile approach of a sweet devastation bleeds from an artistic drive toward a momentum described as "California Heavy."

The band's well-received first album, "Trampled Sun", was released independently in 2011 with Loudwire calling it "a hard-hitting fusion of rocking goodness," and Ultimate-Guitar stating, "if they keep churning out records as good as 'Trampled Sun', they will be mentioned right up there with MASTODON and the like."

KYNG is managed by Bill McGathy and John Bambino at IndieGoot and booked by Anthony Paolercio at The Agency Group.