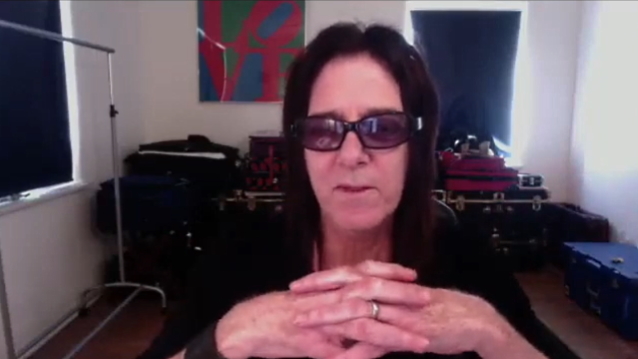 In a new interview with Ornella Carlone of Comebackstage, L.A. GUNS drummer Steve Riley was asked what the biggest challenge is for bands trying to make it in the music business in 2020. He responded: "The reason I came to Los Angeles from Boston [in the 1970s] was because I knew that you had to be here, because this is where all the big machines were — the management, the record labels, just everything was here. The fans, the bandmembers. So I knew I had to come to Los Angeles. The biggest challenge now is there is no big machine happening. The bands have to do a lot of stuff on their own. You have to really dig in and you have to utilize the Internet. That's the biggest challenge.

"I feel bad for up-and-coming bands, because they don't have that luxury of tagging on to a big machine," he continued. "Like when I joined W.A.S.P., they were managed by the IRON MAIDEN people, so there was a lot of connections. MAIDEN was with Capitol, and then W.A.S.P. was with Capitol. That transmission, to go with a big machine, is not there right now. So you have to really dig in. We have to dig in. Even with 'Renegades' [the new album from Riley's version of L.A. GUNS], we have to utilize the Internet and understand that we have to join in on that and not fight it. You have to realize that's where it's at right now and to utilize it as much as you can. I guess it's a great tool.

"In the '80s, you just had so much support from big machines — the management, record labels, the publicists, the agencies," Riley added. "Everything was really right there for you, and that's kind of not there right now. You have to go out and find people, piece together machines, and then, like I said, you have to join the party and get on the Internet and get your web sites up. And know that Spotify, iTunes, Apple, this is the way to go, because you don't have record stores anymore. It's very difficult. So I feel for the young bands. I know it's tough for them."