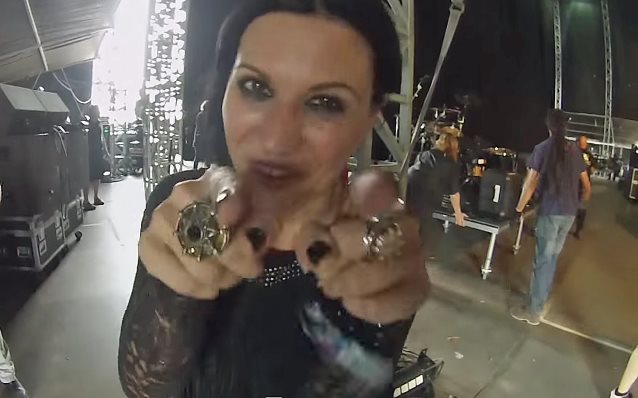 Behind-the-scenes footage of LACUNA COIL's appearance at the 2015 edition of the U.K.'s Download festival, which was held last month in Donington Park, can be seen below.

Speaking about the progress of the songwriting sessions for LACUNA COIL's follow-up to last year's "Broken Crown Halo" album, singer Cristina Scabbia told Kerrang! magazine: "We are writing new material. We wrote a lot of music. [We're] still working on vocal lines, and then we're gonna [work] on the lyrics, because we have a lot of material that we already collected. But we just wanna hear the final results of the music so we can get more inspired and write some more."

Cristina also talked about whether LACUNA COIL's next album will once again take influence classic Italian horror movies. She said: "We always love that stuff, but, yeah, there's gonna be a little bit of that, and probably going a little bit more into darker stuff. But, I mean, it's definitely early to talk about it, because we are very known for changing everything up until the very last day in the studio, so it might come out as a techno record… No, not really… But it will be different. The very last day of the recording, we'll be, like, 'Okay, we've got it. We know how it's gonna sound.'"