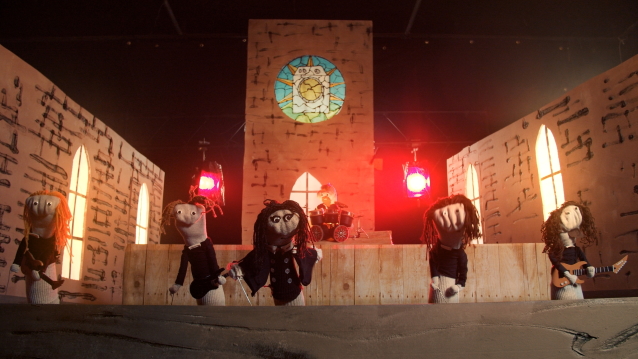 Sock Puppet Parody, which takes iconic bands and glorifies their undergarments by making high-quality music videos featuring socks, has paid tribute to LACUNA COIL by recreating the entire group as sock puppets and reworked the lyrics of the 2002 LACUNA COIL track "Heaven's A Lie" to fit a theme of despondent undergarments lamenting the loss of socks after a dry cycle. The video is decked out with cathedral walls supporting a stained-glass depiction of an unmerciful dryer overlord looking onto the crusade of priest gown clad puppets. It's clear these socks do not agree with modern laundering technology.

Sock Puppet Parody has created many tributes to bands such as METALLICA, SLIPKNOT, and more.

Back in 2019, director Brady Tulk told VoyageDallas about Sock Puppet Parody: "It's a YouTube series that takes iconic bands and turns them into sock puppets. Our team does not cut corners. We not only create the music from the ground up, but we strive to stay true to the last detail. We research the band thoroughly to pay a tribute to the artists and we film it with the best production value we can. We take the concept of the song and apply sock related lyrics.

"We have caught the attention of the bands theirselves, from SLAYER posting our video, to PANTERA's Vinnie Paul making a cameo, to getting a seal of approval from SLIPKNOT's Corey Taylor."

Regarding how Sock Puppet Parody was conceived, Tulk said: "I met a producer named Johnny Zero on the RIVETHEAD set. We eventually went to a concert together and saw the iconic band STATIC-X and the frontman, Wayne Static, had his hair in foot-long spikes and his long beard braided. Johnny and I knew STATIC-X would make for a fantastic sock puppet re-creation. We teamed up and decided to not just do one video, but do six episodes to see if they catch on. We knew there was something special about the concept, and we wanted to see how people would react.

"The pivotal moment for Sock Puppet Parody was when we uploaded a SLAYER parody to our YouTube channel. That day we were posted by numerous metal magazines with thousands of fans leading up to the band posting our video to their Facebook. In one day, over one hundred thousand people saw our video. It was an unbelievable experience. Since then, Johnny and I have been cultivating our audience and growing the brand."