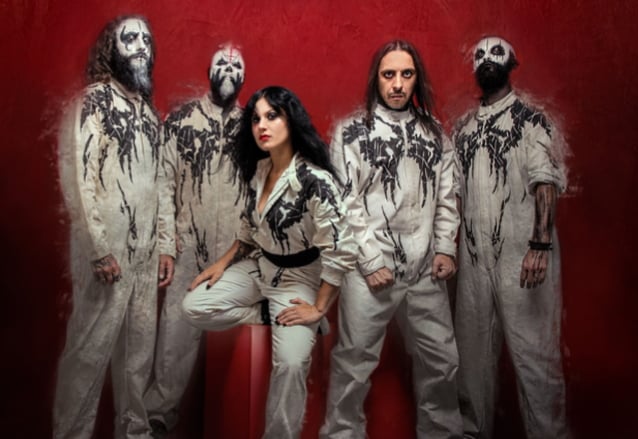 LACUNA COIL Is 'Starting To Collect Ideas' For New Album

In a new interview with Revolver, LACUNA COIL singer Cristina Scabbia was asked if she and her bandmates have used the coronavirus downtime to work on new music. She responded (as transcribed by BLABBERMOUTH.NET): "Not during the quarantine, because we didn't want to force the fact that because we were home, we had to write music. We always thought that to write music, you need to be inspired. And inspiration comes from the outside, comes from experiences that you have, things that you live. At least this is valid for us.

"Everything we do in a regular life, in a normal life enriches us and gives us input that we can put in our music," she explained. "And also we like to write together. So, if Marco [Coti Zelati, bass] creates the basis of the music together with the other musicians in the band, then Andrea [Ferro, vocals] and I jump in with the lyrics and vocal lines. But we do that together. We need to enter in songwriting mode. So we didn't really like the fact that we had to write separately just because we have to put a record [together] because it's quarantine. Now we are starting to collect ideas 'cause we feel a little bit happier."

Scabbia added: "We didn't want anything connected to the negativity of the pandemic… That's why I used my time to do something completely different. Because I know that what I did that it's completely different from what I usually do will make me start again to do what I did before with passion — with the same passion. I was just afraid that if I would have used all the downtime making music when I didn't really want to, it would have had a negative influence on me. And it would have been, like, 'I really don't want to do that.' And I also wanted to prove to myself that, yeah, music is main passion. I love what I do for a living, and I hope that I can do it until the day I die. But I also wanted to show myself that I can be capable of doing something else as well."

LACUNA COIL will release a new live album, "Live From The Apocalypse", on June 25 via Century Media. The effort was recorded at the band's special September 2020 livestream event where LACUNA COIL performed its latest album, "Black Anima", in its entirety. This very special show will now be released on vinyl and CD as well as a digital album. The physical album formats come with a bonus DVD featuring the footage of the original live stream.

In February, LACUNA COIL took part in an initiative dubbed "L'Ultimo Concerto?" (Last Concert) to highlight the increasingly uncertain future of music venues. Instead of delivering live performances as part of a scheduled free virtual stream on February 27, each of around 130 Italian artists was filmed taking the stage at a different venue and then standing there in silence as a way of commemorating the one-year mark since the first Italian venues closed.