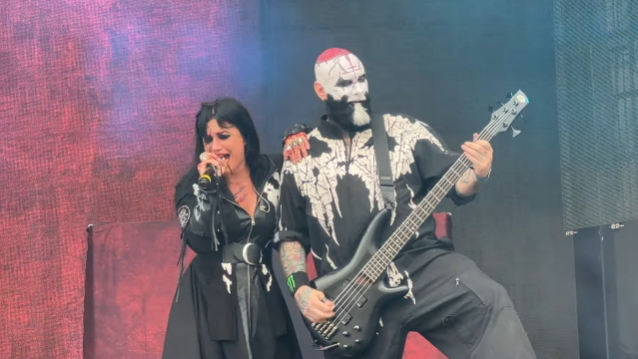 During a June 19 press conference at this year's Hellfest in Clisson, France, LACUNA COIL singer Andrea Ferro talked about new music he and his bandmates have been working on in recent months. He said (as transcribed by BLABBERMOUTH.NET): "First of all, we can say that it's not gonna be album number ten for us, so it's not the new LACUNA COIL record. But it's new music from LACUNA COIL in a special project. We're gonna announce it very, very soon — in a matter of days, like a week maybe. And everybody obviously wants to know what it is, but we can't say. But it's gonna be revealed very, very soon. And we're also working on some new songs for an eventual album number ten, but we don't have anything ready yet. So we're doing parallel work on these two different things. Hopefully you're gonna enjoy it."

Ferro's latest comments echo those he made earlier in the month at the Download festival in the U.K. At the time, he told Rock Sound: "We've been a bit sneaky, to be honest. Because, yes, there will be new music coming out soon, and soon we're gonna announce what is it exactly, but it's not album number ten." Added LACUNA COIL co-vocalist Cristina Scabbia: "It is something special — it is a special project. But it is recorded. We're actually finishing little things here and there." Continued Andrea: "We can't say much. [But] very soon — in a couple of months everything will be more clear." "And you will see something new as well soon," Cristina said.

Two weeks ago, LACUNA COIL announced a U.S. tour for late summer. The 13-date trek will kick off on September 8 in Harrisburg, Pennsylvania and end of September 23 in Joliet, Illinois. Support on the trek will come from BUTCHER BABIES, UNCURED and LIONS AT THE GATE.

As previously reported, LACUNA COIL will celebrate the 20th anniversary of its third studio album, "Comalies", by performing it in its entirety at a one-night-only concert on Saturday, October 15 at Fabrique in Milano.

In February 2021, LACUNA COIL took part in an initiative dubbed "L'Ultimo Concerto?" (Last Concert) to highlight the uncertain future of music venues. Instead of delivering live performances as part of a scheduled free virtual stream, each of around 130 Italian artists was filmed taking the stage at a different venue and then standing there in silence as a way of commemorating the one-year mark since the first Italian venues closed.