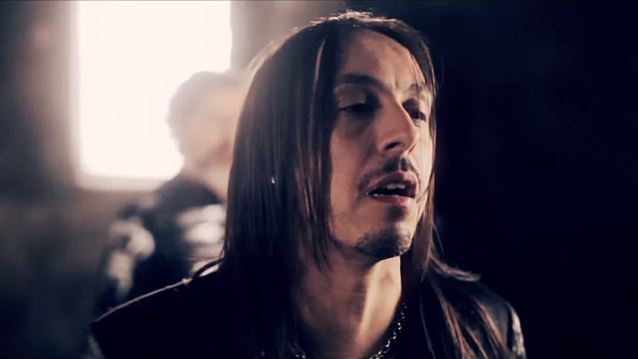 Tom of The Metalheadz conducted an interview with vocalist Andrea Ferro of Italian heavy rockers LACUNA COIL during the band's current UK headlining tour. You can now listen to the chat below. A couple of excerpts follow (transcribed by BLABBERMOUTH.NET).

On how LACUNA COIL's latest studio album, "Broken Crown Halo", is being received by the fans:

"Obviously, times have changed. And also the life cycle of an album is different than it used to be. We used to tour for two years for a record, and then take another year to write the next one and maybe every three or four years release an album. Now you have to kind of come up with an album every two years. So it pushes everything faster. Sometimes I don't like that because it's a creative process to write an album, and you don't wanna be forced too much. Of course you need to have a deadline; otherwise, you'll take forever to finish a record. But it's also not good to have, you know, there is this deadline [where] it has to be out within a couple of years; otherwise people will forget [about the band] or there will be somebody else. We're lucky enough to have built a name in previous times where there was still the chance to grow up to become a better band step by step, not neccesarily on the first release. And so we're lucky we have a name where people that are following us, and now we see different generations of people coming to the shows. But it's very hard for new bands to do that. And I really don't like the fact that we're pushed to release an album. I would love sometimes to just take a little more time, because that's what creativity is about — to develop ideas, not just to try to force them. But you have to cope with the reality then that the fast way music is being produced and used by the people."

On whether the shorter album cycle can be attributed to the fact that there is now more money in touring rather than record sales:

"Yeah, that's for sure, but also it's the way the Internet has been speeding up everything. You have one video one day on YouTube [where you go], 'Wow, that's so cool,' and then the next day, or maybe the same evening, you already have something else. So the spread of attention is very quick. And the new generation has discovered music through YouTube or Spotify or illegal downloading, so it's changed the way they use the music. It used to be, you buy this CD, when I was a kid, you buy this CD, and it's gonna be there forever, every day, in your car or in your stereo, for a long, long time, and nowadays, it doesn't happen as much anymore. Some people, yes, they grew up like me, so they still buy the CD. Some others, they just pick up a couple of songs or a video that they like. So it's just a different world. I'm not saying that it's worse or better; it's just different."

On how the changes in LACUNA COIL's lineup will influence the musical direction of the band's next album:

"Basically, there is one new member, which is the drummer [Ryan Blake Folden]. But he's quite a different drummer [from LACUNA COIL's previous drummer, Cristiano 'Criz' Mozzati] — he's very good with really fast double bass, and a heavier kind of drummer, in a way. And so I think there will be a little bit of heaviness on the next record — which we always wanted to bring, but sometimes we couldn't, because it didn't appeal to the style of the drummer, or he wasn't feeling… I think at this point, in our age and in our career, we're kind of free to go wherever we want. Of course we're not gonna do something completely different, because it wouldn't make sense — you still need to recognize the style of the band — but definitely we're gonna experiment a little bit more on the double bass and there will be some fresh air, some new ideas."

"Broken Crown Halo" sold around 13,000 copies in the United States in its first week of release to debut at position No. 27 on The Billboard 200 chart. The CD arrived in stores on April 1 via Century Media.