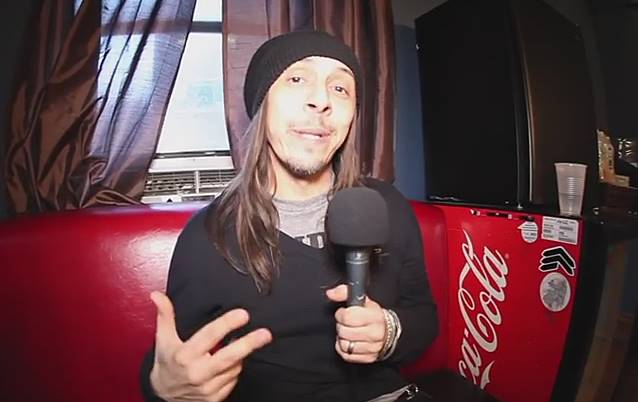 Jo Schüftan of Horns Up Rocks! recently conducted an interview with vocalist Andrea Ferro of Italian heavy rockers LACUNA COIL. You can now watch the chat below.

LACUNA COIL last month hit the road as a quintet as part of "The Hottest Chicks In Hard Rock Tour" following the departures of guitarist Cris "Pizza" Migliore and drummer Cristiano "Criz" Mozzati. Marco "Maus" Biazzi is handling all guitar duties on the trek while drummer Ryan Blake Folden is once again sitting behind the kit. The band states: "Fans will already be familiar with Ryan, as he performed live with LACUNA COIL on the majority of the 2012 and 2013 'Dark Legacy' and 'Dark Adrenaline' tours."

Regarding the departures of Migliore and Mozzati, LACUNA COIL singer Cristina Scabbia told U.K.'s Metal Hammer: "It's something we announced [in mid-Febraury] but knew for a few weeks, and honestly, I feel good, because we couldn't have a better — I don't even wasn't to use the word 'split'; that sounds like, 'Oh, we had a big fight and we don't want to see each other anymore,' she said.

She continued: "The drums [on the U.S. tour] will be played by Ryan Folden, who played with us for the last year while Criz was at home growing up his kid. And for guitar, we are going on with Marco only, and then we will decide.

"It's too early to think about replacements, and we don't even know if we want that. We might work with session musicians for a while, because even if we are serene and happy, it's hard for us, because we lost two brothers, so we don't want anyone to come into the family just like that. It would be wise, I think, just to go on with us four and then move on with friends like Ryan, who is a great drummer and very easy to get along with. And that's an important factor, because if you're going to share a tour bus with people, you have to be able to get along with them!"

The Revolver-magazine-presented "The Hottest Chicks In Hard Rock Tour kicked off February 20 and features LACUNA COIL sharing a stage with SICK PUPPIES, Century Media Records labelmates EYES SET TO KILL and CILVER. The tour launched in Wilmington, North Carolina, and runs through March 20 in Anaheim, California.