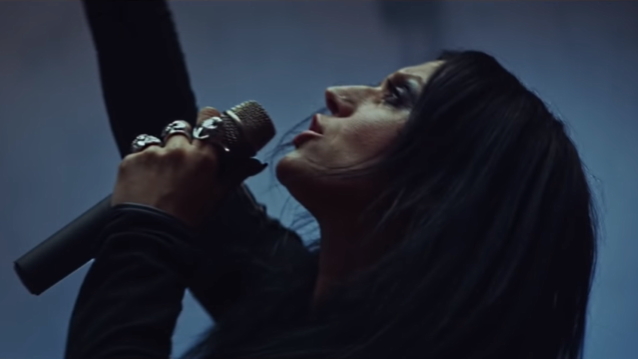 In a brand new interview with France's Duke TV, LACUNA COIL frontwoman Cristina Scabbia spoke about the inspiration for the title of the band's new studio album, "Black Anima". She said (see video below): "We wanted something simple but straight that could represent us and our music as well. So 'black' came up, because [points to her black outfit]… come on. [Laughs] We just like a dark vibe in general. And we said, 'Yeah, but what can we add to it that can explain it even better?' And we thought about 'soul,' because we poured everything out of ourselves on this record. And 'anima,' in Italian, sounded much better, so we we said, ''Black Anima' it is.'"

"Black Anima" is being released today (Friday, October 11). Scabbia previously described the LP's musical direction as "heavier and darker" than the band's past efforts. "I don't think that LACUNA COIL has ever been so heavy," she told HardDrive Radio. "And it will be surprising a lot of people, because we experimented a lot of things differently — vocally and musically."

Co-vocalist Andrea Ferro said that "there's quite a variety of songs" on "Black Anima". "There's heaviness, but there's also some more melodic tracks that can be more catchy," he explained. "But it's a very complex record with a lot of different flavors. And we experiment a lot on the lyrics about our lives growing up, experiencing loss or other things that you get more of in the mature age. So we felt the connection with these people that [are] not with us anymore, so we decided to talk about this connection that we feel beyond life."

LACUNA COIL and ALL THAT REMAINS have joined forces for the "Disease Of The Anima" North American co-headlining tour. The trek includes special guests BAD OMENS, EXIMIOUS and UNCURED.